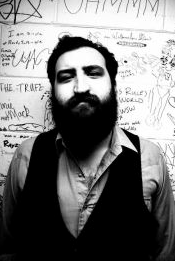 This April Mars Cafe presents a new acoustic music series, Sound Rover, in which Iowa songwriters and touring musicians perform their original music. Sound Rover is a space to explore, for audience and artist alike. During multiple events each week this April, audiences will hear favorite tunes played in a new way or new material musicians are developing. Featured events this month include several exciting touring acts, local favorites, and a special listening party the night before H.D. Harmsen’s debut album release from Maximum Ames. Learn about all our April shows below and at http://marscafe.net/events/.

Burlap Wolf King, is the vessel of song for South Dakota singer/songwriter, Thomas Hentges. Hentges himself has described his work with Burlap Wolf King to be “a search for bare boned truth in song”. Burlap Wolf King’s debut album, “the middle” was released on 4/25/09. ‘the middle’ was recorded with the help of Sioux Falls’ own, the Smoke & Mirrors band, in the barren chill of Aberdeen, SD during the months of January and February 2009. The album went on to be received well by both regional and national press. Along with favoring album reviews, Burlap Wolf King was named one of, “the 50 best new bands in America” by the Boston Phoenix in the spring of 2010. Over the years Burlap Wolf King has had the pleasure of sharing the stage with the likes of the Hold Steady, Trampled by Turtles, William Elliot Whitmore, “Spider” John Koerner, Deadstring Brothers, the Pines, Charlie Parr, Mason Jennings, Whitey Morgan & the 78s and many more. His new five song EP, released January 2013, includes some of the best work from Hentges to date.

Black Hills duo Jami Lynn & Dylan James met on the street in the summer of 2012. Their fortuitous meeting not only revealed their shared love of folk, bluegrass, and jazz, but marked the beginning of an ambitious duo project harnessing Jami’s powerful vocals and Dylan’s first rate flat-picking skills. After a few weeks of working up material, their hearts were set on a full length album featuring songs written by each. Lynn’s vocal prowess, delicate finger picking, and West Virginia style claw-hammer banjo blend seamlessly with James’s ringing tenor, driving guitar, and old-time fiddling. Their diverse instrumentation as well as their unique arrangements of traditional American folk songs and jazz numbers sets them on the edge of each genre.  Both are native South Dakotans and are currently based out of Rapid City, SD.

Dustin Smith and the Sunday Silos is an American folk-rock band from Des Moines, Iowa. Born to performers, Dustin was raised in a home filled with music. In his late teenage years, he moved to New York City to study music. He became certain he wanted to devote his life to songwriting, and his first album Summer Afternoon was created. After a few tours in the Northeast, Dustin returned to his roots and recorded Burgess. In crafting this EP a band was formed. To acknowledge the new group, Dustin added “the Sunday Silos” to his name. Continuing to develop their sound, they returned to the studio to record their first full-length album, Northerner, set to release in 2012.

On April 25, Mars Cafe will host the pre-release listening party for H.D. Harmsen’s debut album “Papoose,” to be released on Maximum Ames Records the next day. Come and listen to the long-awaited tunes, live AND fresh off the vinyl press! Watch his new video here:

Alex Kintzle is a 19 year old singer-songwriter who successfully crowd funded and self released his first EP “Broken Record” in July of 2012. Since then he’s played shows around Iowa, including Maximum Ames Music Festival which was headlined by Jeff Magnum of Neutral Milk Hotel and Wanda Jackson.

Joshua and Kristen Putney are the husband and wife duo behind the music of local folk rock band Diamonds for Eyes. This will be your chance to hear their rockin’ tunes stripped down. Here’s a link to their recently-released music video!