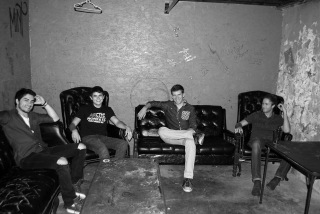 Colin Sullivan doesn’t look like the stereotypical farm-town Iowan. And he’s not. The Clinton, IA, native looks more like a British boy band outcast, except that he’s permanently swathed himself in band t-shirts—mostly representing influences like British rockers Arctic Monkeys. And his group, John June Year, doesn’t have a hint of country in it. Instead, the band pounds out upbeat, hard rock that keeps the crowd going. Here’s his take on songwriting, building a fan base, and Kickstarter campaigns.

On starting John June Year
Greg [Heysinger, lead vocalist] and I started playing together and listening to the same music in high school. That would have been in 2010. But we didn’t really have our first gig until 2011. We didn’t even have our first song until 2011.

On making a name
It was really hard to make a name for ourselves at first, and it still is. From the beginning we’ve had great support from our friends. Our first gig was at a kegger in Iowa City in our buddy’s basement. I feel like our friends that knew us from the beginning feel really close to us and really helped us spread the word.

On kickstarter funding
We wanted to get some money to pay for the studio. We’re making the three-song EP to create some buzz for the album. Before the Kickstarter … We had enough money just to afford maybe two or three songs … We wanted to have something for people to listen to right away. Our Kickstarter goal was $5,000 because we wanted to be able to finish up the next album and have a little money for touring and merchandise.

On working with producer Brandon Darner
[Brandon Darner, The Envy Corps] had a few gigs with us at the Hub, so we built a relationship with him and he was interested in our music as well. He keeps an ear out for cool music he might be interested in. It took a while, but we got around to talking about doing an album with him in the winter of 2013. It was really cool that he was actually interested in us … I think it was a mutual interest for both of us. That’s who we’ve been doing the EP with and we’re gonna finish up the album with him. He’s worked with such great artists …. It’s pretty crazy to have someone with that much reputation evaluate music that [I] just came up with in my bedroom.