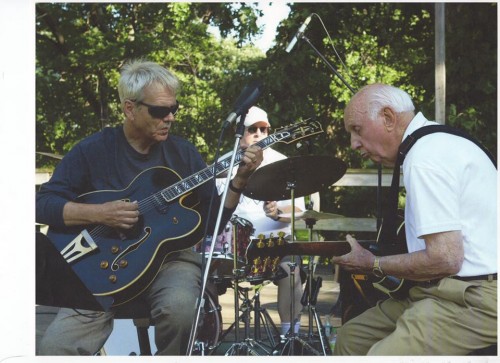 Every city has its jazz heroes, and Des Moines is no exception.  For the past 14 years, the Community Jazz Center of Greater Des Moines (CJC) has honored these heroes with its Annual Hall of Fame and Special Recognition Awards. This year’s event is scheduled for the evening of Sunday, October 19, at Adventureland Inn.

CJC will be inducting the following musicians into the Hall of Fame, which now numbers a total of
36 musicians:

•  Steve Charlson — When you need a bass player in Central Iowa, Steve Charlson is on the top of the list. A native of Waterloo, Steve attended the University of Northern Iowa, where he won a DownBeat Magazine outstanding soloist award. Since arriving in Des Moines he has played with a who’s who of the Des Moines jazz community and appears weekly at Chucks Restaurant.  In addition, he has performed with the Jimmy and Tommy Dorsey Bands, Rosemary Clooney, Captain and Tennille and Steve Allen. Currently, he is principal bassist with the Dubuque Symphony, a member of the Des Moines Big band and a busy freelance bassist throughout the Midwest.

Other awards to be presented at the event include:

The Hall of Fame event will kick off at 5:00 p.m. with a performance by the CJC Youth Combo. Doors open for the main event at 6:00 p.m. for live music followed by the ceremony and lots of live jazz performed by some of Des Moines’ finest musicians throughout the night, including many past Hall of Fame recipients.

Admission is $20 if tickets are purchased and paid for prior to October 19.  Admission at the door will be $25. Food will be an additional option that may be purchased during the social time at the beginning of the evening.

The CJC Hall of Fame is always a very special night jam packed with live jazz performances and tributes that you won’t want to miss!   Visit dmcommunityjazzcenter or call Phyllis Leaverton at 515-276-0777 for ticket information.