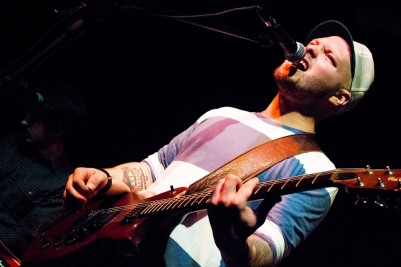 Dustin Smith and his new band, The Maytags, are on a mission to make listeners “want to roll their windows down and feel human again.” Which for Smith isn’t as odd as it sounds. He sees “feeling human” as being honest with yourself, something Smith has been working on. He had to be honest about the difficulties of his last band, Dustin Smith and the Sunday Silos. And he’s trying to be honest with his new group, The Maytags, a six-member mash-up of soul, R&B and folk. It might not always be easy, but it’s is good for the soul—and for making soul music. Listen up and roll your windows down, as Dustin Smith talks about music, life, and feeling human.

The end of the Sunday Silos
With the Sunday Silos, I started to struggle with such a big band. Juggling schedules and trying to get nine people nailed down for rehearsals and out of town dates became difficult. But mostly, I felt like the songs I recorded with the group that’s now The Maytags had a new sound. It made sense to form a new entity.

The beginning of The Maytags
I thought it was probably a good time to build a new identity. … It’s kind of a stripped-down and more focused version The Sunday Silos. … It’s soul. It’s R&B. It’s American Folk Music. We’re just doing what we love.

On being honest with himself
Truth is, I don’t write music for any purpose other than being honest to myself and who I am. Lyrically and stylistically, I stay rooted in myself and what I know. That’s what makes playing songs fun for me. If other people enjoy it, then great. I do feel that listening to a lot of soul music has made me write in a style that lends it self to more of a good time. And, with The Maytags’ setup, I try and write songs that are fun to play live. There’s such an energy on stage with those boys, and I keep that in mind when writing material for the band. However, I have written a lot of songs from some very serious and deep places. When I play acoustic shows or more intimate shows I tend to bring them out. I released a 6 song EP in 2009 that was all about the death of my father. Probably some of the deepest material I have written.

On feeling human…
Feeling Human. It’s a broad statement. I feel like our generation is flooded with expectation. People get lost in right and wrong. Technology is a great tool, but is also a huge distraction to reality sometimes. The more time that passes the farther people get from themselves. It’s important to stay rooted and be honest in today’s world… I write music from an extremely honest place. A place that makes me feel myself. I hope when people listen to my music, they can take a moment and just be themselves too.

On the return of The Sunday Silos…
Maybe someday—way farther down the line—I may try to get everybody back together, but, as of right now, I’m just completely focused on The Maytags.

Advice for New Artists…
Don’t ever sell yourself short. Hard work always pays off… If it was easy, I think everybody would be a musician.