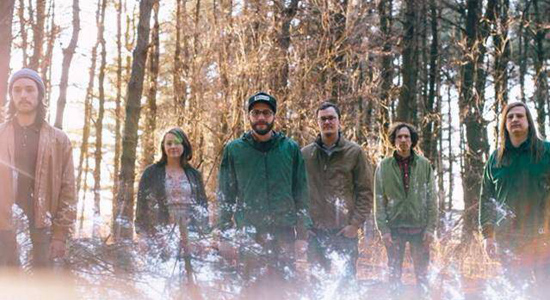 It’s been a big year for The River Monks. In May the Des Moines quintet released its sophomore record, Home is The House. Soon after, things go crazy. There was summer stints with the Gin Blossoms and The Lumineers. MTV and VH1 started showing the bands video for leadoff single “I Am a Lake.” And the culmination: a homecoming gig at this past July’s 80/35 music festival. The River Monks singer-songwriter Ryan Stier sat down and discussed the album, folk as a genre, and the Iowa music scene he and the band are an active part of. See him at Music University on Oct. 4-5.

DMMC: Folk has really reemerged. What makes you connect with folk as an artist?
Stier: For me personally, it feels like an organic way of making music. Folk music is rooted in the acoustic instrument; you can always pick up a guitar. … Folk will always be around, varying in popularity. I think there a lot of people that feel the same way about it that I do. Genres will come and go, but it feels like folk might always be around.

DMMC: You put a lot of emphasis on your harmonizing. Do you feel like that’s the core of your music?
Stier: Yeah, that’s what a lot of people point out when they talk about our group. Our instruments are our instruments, but our voices are what make us really unique as individuals and as a group.

DMMC: Where their artists that inspired you and the band, that really helped inform the direct you took?
Stier: The artist I’ve gotten compared to most is Sufjan Stevens, and I agree with that. We modeled the band after Good Old War, a three piece that does folk instrumentation and they all sang so that’s where our roots were. There’s a lot of music out there that I don’t necessarily think is genuine, so stuff that feels like they’re making it for the right reasons but sounds awesome too, that’s important to me.

DMMC: I saw that you went vinyl with Home Is The House. Why go vinyl?
Stier: I think taking that step with an album means that you really committed to the album. Vinyl is a big commitment. It’s kind of like an ode to the album. It sounds the best in that way; you can hear different things, and it sounds better than hearing it digitally.

DMMC: What has been the highlight of your career with The River Monks since your started in 2010?
Stier: The tour we went on this summer. What I love the most is performing. We put in a lot of work into the album, to be able to celebrate it for a couple months, play every night, that was a big plus. Our tour started in Des Moines with some awesome release shows with some of my favorite band from the area. It ended at 80/35 Music Festival. That was probably the biggest show we ever played. It wasn’t like we were nervous or anything. We just felt good at that point. So that was cool to play for a hometown crowd and feel really good about it.