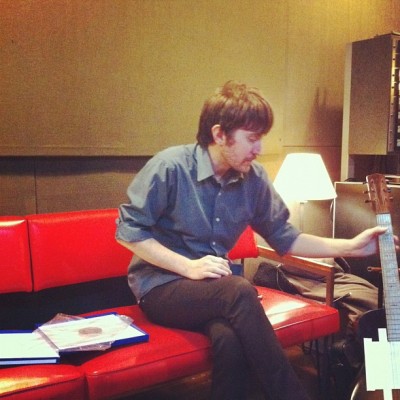 The music industry is in the middle of a digital shift, but Nathan Cook refuses to partake. The ‘70s rock-inspired music producer still prefers the old ways. He’d rather record to analog tape, a methodology that’s inching towards extinction. He loves vinyl, so much so his most recent work, Liam Hayes’s album Slurrup, which hits shelves in January of 2015, will get an old-school pressing. Cook took a break from the studio to share the roots of his classic style and what the digital age means for future producers. Catch him at Music University on Oct. 4-5.

DMMC: As a producer, what do you bring to the table?
Nathan Cook: When a person who writes a lot of material is trying to put it down in the studio, it can be difficult for them to transmit because they have to focus on performing it. I pride myself on being able to break down what the performer is going for and bring energy to it. I worry about the big picture and how it’s going to translate, freeing them up to just focus on the performance.

DMMC: What’s your preferred genre to produce?
Cook: With Liam, the record we did is primarily a rock record. But when we did the film Inside the Mind of Charles Swan III soundtrack, we jumped through a thousand genres. I guess I’m more drawn to rock because that’s what I grew up listening to with my dad. Bands like Spirit and Elvis Costello—my dad listened to all that stuff. But I also grew up listening to Hall and Oates, so I appreciate the electronic side of things.

DMMC: Did you receive a formal education in the industry, or did you learn by a hands-on approach?
Cook: Both. I studied music theory and audio recording at Indiana University. After interning at studios, I realized that lots of what I had learned in school wasn’t really applicable. So I had to relearn by being hands-on. The [method] enables you to learn problem solving on your own. If there are devices that are failing, you need to be able to patch around them. You don’t really learn that kind of stuff in school.

DMMC: What skills are required for a music producer now that weren’t as necessary 20 years ago?
Cook: Everything is definitely computer based now, which to me is a pretty big bummer. There was a lot more power and creativity in music when people were working more on analog tape. These days, people would need to understand how to work on a computer across different platforms in different people’s studios and really have their mind around it. And that’s a completely different skill set from what I learned.

DMMC: What advice do you have for those looking to differentiate themselves more professionally as a producer?
Cook: Liam Hayes taught my a lot about this. His perspective was really influential on me in that he views the computer—if you’re going to use it all—as a sketchpad. So when you really get into a professional recording and want to step it up out of the demo range, you have to start thinking about the arrangement of the music in a bigger way. There’s a huge difference between doing something at home on a laptop and doing it in a studio where you can really zone in on the sounds and make it plush.

DMMC: How important is maintaining a reputation in the industry?
Cook: It’s really important. A lot of younger people trying to break into production or engineering will make the mistake of taking on just any project. It can be detrimental because you can get stuck working on things that don’t get a lot of notoriety. So you have to be a little choosey and work on things that you really believe in. If you want to transcend, you have to have a record or two that breaks into a bigger arena of awareness in the public’s mind.