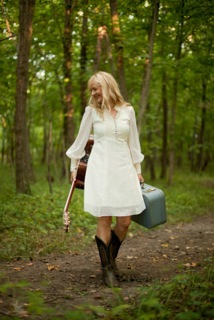 Mary McAdams has a few simple goals for the monthly open mic night that she hosts at Ritual Café. No. 1: Providing a place for people to play their music. Simple enough. No. 2: Encouraging new musicians to “get on stage and learn how to work a microphone stand,” she says. Trust us, it’s more complicated than it looks. And No. 3: Giving performers enough confidence “to not puke.” Which is really close to Mary’s heart. Not because she threw up on stage. More because she almost gave up her dream of being a musician. She had horrible stage fright. Since overcoming it, though, she’s released two albums—and helped countless others conquer their performance phobias. Here’s her take on songwriting, stage fright and capturing your dreams.

DMMC: What was it like starting off in your music career?
M: Well, my first album was a dream. It was a dream that I never thought I was going to attain. (When I first started off) I had debilitating stage fright, so I put away my guitar, convinced myself that I didn’t want to do that anymore. That wasn’t who I was anymore. Then I met my husband… and we had a family and I thought, ‘This is what I was born to do. I’m not a musician, I’m a mom.’ And the whole while, I was getting meaner and meaner with every year because the music was calling me, and you can run from your calling for a very long time but you cannot run forever. I turned and faced my fear about ten years ago, and I haven’t looked back. It was the best thing I ever did. I had to face my stage fright at that point because not doing something that you’re afraid of is worse than not doing it at all.

DMMC: What are the challenges of writing and producing an album?
M: The hardest part for me is the writing. It’s treacherous and I hate it and love it all at the same time. I just want to write a better song than the one before, and so far so good. But the recording of a song is bliss. If I could be in the studio every day of my life, that’s where I would be.

DMMC: Where do you get your inspiration for your music?
M: I attend a lot of workshops around the country all year to keep that fire fueled, and I study with some amazing Grammy winning writers. That’s how I keep it fresh. Song writing is hard, and the older I get, I’m trying to get out of the way and let the song be what the song wants to be. … Someone told me in a workshop a quote that I think about everyday: ‘You don’t need to know where you’re going, you just need a way in.’ I just want (my songs) to blow your mind and make you cry.

DMMC: What do you want your music to mean to other people?
M: I’m a storyteller with a purpose, and I just want to tell the truth. I really want someone to listen to one of my songs and say, ‘Oh my God, how did she know? That song is about me. How did she write my story?’