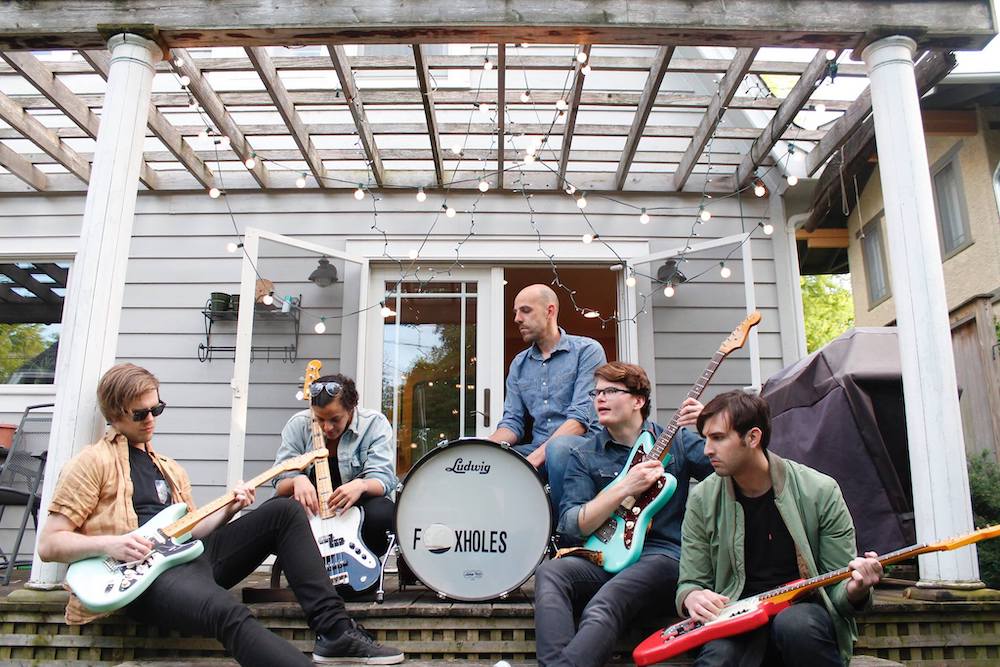 Catch them at our 10th annual Backstage Ball fundraiser on March 8 at Noce.

DMMC: How did Foxholes get its start?
Foxholes: Our first show was in November 2012 as a four piece (Trevor, Kyle, Jessica and Ben). I met Kyle and Ben through Craiglist ads and Jessica and I were friends. After playing for a year and a half and putting out our first album, we added my friend Craig to the mix.

DMMC: What are each of your roles in the band?
F: Aside from what instruments we play, our roles are pretty fluid within the band but in general Ben and I (Trevor) split up booking, social media is kind of shared by everyone, Craig handles the website and Jessica does a lot of our artwork while Kyle provides the comic relief.
i. Trevor Holt – Vocals & Guitar
ii. Kyle Folvag – Guitar
iii. Jessica Villegas – Bass & Vocals
iv. Ben Barndollar – Drums
v. Craig Bowers – Guitar 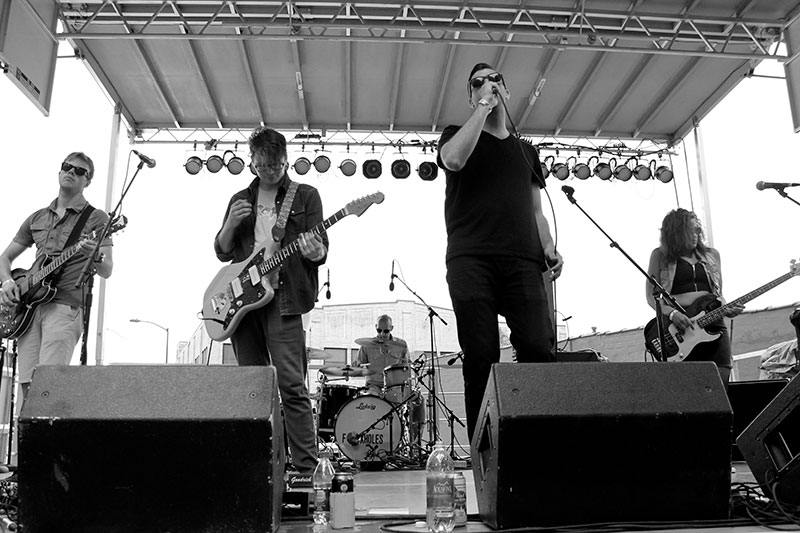 DMMC: Tell us a bit about your writing process?
F: Our writing process usually begins with someone bringing in a song or idea that is somewhat fleshed out – so maybe a verse/chorus – and then we play through that to the point where everyone can develop their parts around that idea. Once we have that foundation we will come back and tweak the structure by adding a bridge or middle section or shortening parts up.

DMMC: You’re all very talented musicians. How’d you get your starts?
F: I had no prior band experience before starting Foxholes but I had the desire to be in a band and because I didn’t feel confident enough to join somebody else’s, I started my own. Kyle has a strong music theory background and has been playing guitar for forever. Jessica has more of a classical music background – she can play cello – but she is also a great improvisational player. Ben has been playing drums for a long, long time and has been in a number of bands. Craig was the last to join the band but he had opened a show for us playing some of his songs.

DMMC: What’s been the biggest moment in your career so far?
F: Getting to play 80/35 a second time this past summer has got to be up there, I’d put getting accepted into the DMMC’s Music Fellowship pilot program would be right there too.

DMMC: How have you seen the music scene in Central Iowa/Des Moines change throughout your years of playing music?
F: We’ve been a band for 6 ½ years which isn’t terribly long but I feel like the shelf life of a local band is typically less than that so it’s been a little surreal to think about everything that’s come and gone during that time period. The scene kind of ebbs and flows with regards to momentum but the one constant has been the talent, I’ve been in constant awe of some of our peers and the art they’ve produced.

DMMC: What was your greatest takeaway from your experience participating in DMMC’s Music Fellowship pilot program?
F: There was a lot great information about operating a band but my greatest takeaway is that there are people like Amedeo in this city that are really invested seeing Des Moines artists succeed and willing to provide resources to those artists in an effort to help them succeed. I hope this program is able to continue and that it can get more in-depth and expansive because there are many invaluable sources of knowledge and influence that can be tapped in this city.

DMMC: Tell us about one of your favorite live performances.
F: The first time we played Rozz Tox in Rock Island, IL I tried climbing on Jessica’s shoulders during a song and ended up face-planting into a this little wedge between the wall and the PA speakers.

DMMC: Who are some of your musical influences?
F: The Strokes, The Jesus and Mary Chain, Joy Division, Television, The National, The Cure to name a few.

Pink Neighbor was a participant in the DMMC Music Fellowship program, a career-focused education initiative that offers local musicians rigorous training and mentorship across all facets of the music industry.