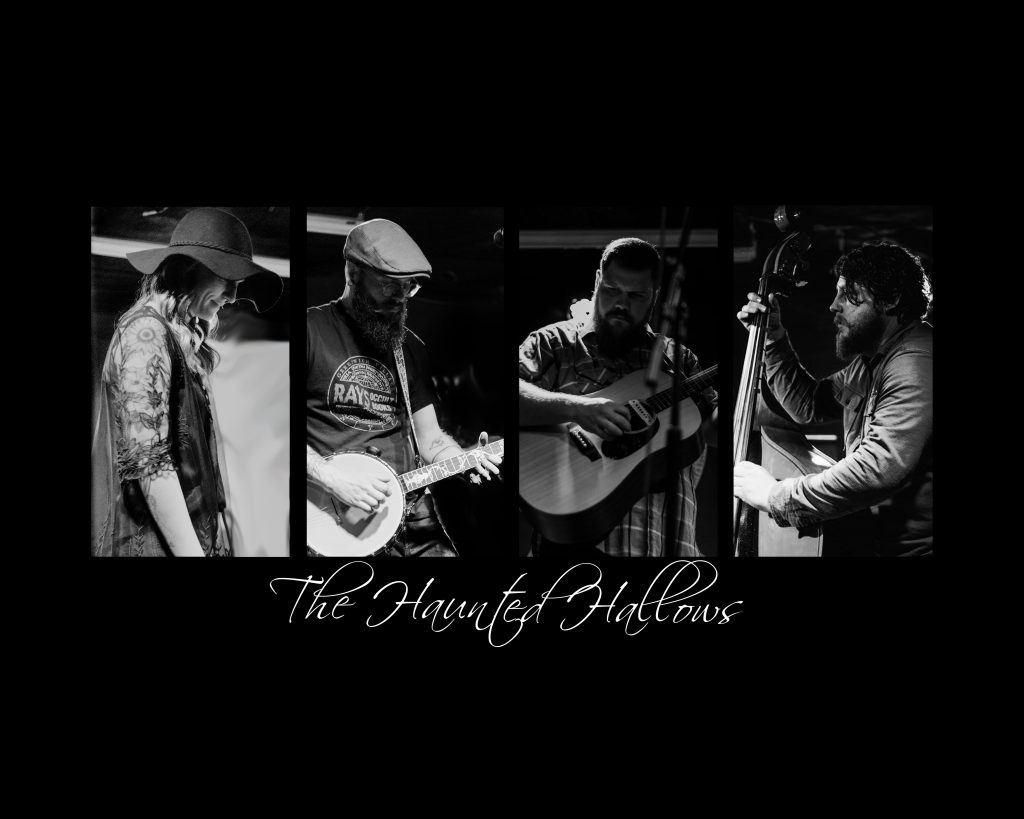 We recently reached out to Ben Burzette of The Haunted Hallows about the behind the scene information we’re craving about the band, and we were not disappointed by the detailed answers Ben sent back! We’re thrilled to have them involved this year at Backstage Ball!

Ben Burzette: We started playing publicly in Feb 2017 just the three of us (Ben, Mallory, Thomas) under the name “Ben and his Banjo,” but shortly after we changed the name to The Haunted Hallows. Having spookier themed lyrics and songs it seemed fitting. That fall we were invited to play at the Briar Patch Festival in Bevington, IA for their Halloween event. There we met Bob Rice (Deadline String Band) who became our first bass player. Bob recorded our first EP, “A Potter’s Field”, with us in the Summer of 2018, but then decided to leave the band a few months after its release due to scheduling conflicts. While searching for another bass player Thomas suggested we talk to the bass player for his other band, The New Bodies, to see if he would be interested in playing some shows with us. That’s when we met our current bass player Danny Wolf.

Danny is also a seasoned musician playing in a lot of bands over the years (Wrestling With Wolves, Small Towns Burn a Little Slower, The New Bodies, etc.) So when we first played together he blended in with ease. Our personalities really clicked, too. Danny was predominantly a singer/songwriter and guitar player, but has now expanded his skill set to include bass. Since Joining The Haunted Hallows he’s transitioned to standup bass as well.

Ben Burzette: I wrote our song “Soul Cry” while in my last band actually, but over the years have added more lyrics to it. It’s by far the song that has evolved the most with the band. Our song “Jack Meadows” was the first song that Mal and I wrote lyrics together. Both of those songs will be on our full-length album that we will begin recording this spring/summer. Our song “Into the Wild” on our EP was the second song that we wrote lyrics together. That song is about the true story of Christopher McCandless, which is told in one of our favorite books and movie with the same name (Into the Wild).

Ben Burzette: For the material we have now, I’ve written all the music, vocal melodies, and some harmonies (sometimes those come organically during rehearsals).  I don’t have any specific process. Sometimes it’s based off a banjo lick. Other times a chord progression. It basically just comes down to me sitting down with a guitar or banjo, strumming some chords and I’ll just sing nonsense using various melodies. Phrasing gibberish with different consonant and vowel sounds until something I like comes to fruition. Basically, I sing in tongues. Sometimes it’s a melody first sometimes a lyric or phrase or both. Most often the lyrics come after melody.

Some of our songs I’ve written all the lyrics to but a lot of them happen when I’ll run lines by Mal and she gives me adjustments or additional lines back. Other times one of us will have a concept song or story and we’ll write lyrics around that idea. Then once the song is mostly arranged Thomas and Danny add guitar and bass. Of course, certain aspects of songs do change after we play them together for a while. They can evolve over time.

Ben Burzette: The biggest moment? Well, so far it was probably when we released our debut EP, “A Potter’s Field” on all major streaming platforms.  Even though nowadays anyone can record and release something to the world, it’s still pretty cool because we put a lot of work into it and had a lot of fun making it. So it’s something we’re proud of.

Ben Burzette: Oh wow! Well, online music distribution and the ease of recording has changed the music scene in general beyond measure. So in short…it’s changed a lot. The local scene is much larger and a lot more diverse than it used to be. When I was playing in my first band it seemed like there was mostly metal and hard rock bands and only a few venues for local bands to perform (unless you were a blues or cover house band at a bar). Then again, that view may be skewed being I was still underage back then. Now there seems to be all sorts of different musicians and bands around. Also, there are a lot of new venues too. Not just for local acts to play at, but bringing in great touring acts as well. It seems like there are a handful of new music venues starting up every year. Also, a lot of bars and restaurants seem to be expanding their establishments to include live music. It’s great and there’s a lot of growth I still see happening.

Ben Burzette: The latest show just played is always my favorite. Whether it’s a great show, where I walk away feeling we did our best, or it was a bad set and I’m humbled by the fact we made some mistakes and didn’t meet our expectations. This last show we played was particularly special because it was the first full show since Danny transitioned to standup bass and he killed it. We all had great performances that night, too. Makes me excited to see how we will grow going forward.

Ben Burzette: This is always such a loaded question. Unfortunately, there are too many artists and bands to mention that have extremely influenced me musically and artistically over the years.  Especially when considering the different stages of musical progression throughout my life. So, I guess I’ll keep it to my influences as a banjo player and a bluegrass/folk song writer.

As for banjo, I’m still a relatively new player so there are new artists I’m being exposed to all the time. When first starting out, I really got into the claw hammer style of Bob Carlin. And one of my favorite claw hammer albums is Cathy Fink’s “Banjo Haiku”. She actually does a lot of children’s albums and teaches online lessons. I’ve taken a few of her classes online, so she’s actually contributed a lot to my playing style. Also, there is this banjo player named Lukas Poole who owns and operates The Ozark Banjo Co. and he’s an online teacher whom I’ve learned a lot from, too. I haven’t actually taken any on his lessons and he doesn’t have any albums available that I’m aware of; but I’ve spent countless hours watching him play his renditions of traditional folk songs online. He has such a clean style of playing claw hammer. I’ve watched his technique intently and have learned a lot by just trying to emulate what he does.

As a songwriter, I have a whole other group of influences. Too many to name. I like to think every different genre of music I’ve listened to throughout my life still influences my song writing, but it was my discovery of traditional folk “murder ballads” that really sparked an interest and comes through in a lot of Haunted Hallows material.

Man, I could go on for days about my musical influences and I know the rest of the band has other influences as well. So it’s best to stop there before I go down a rabbit hole.

We plan on going into the studio this spring to start recording our first full-length record. The goal would be to release it late this year or early 2021. Other than that, we just plan on playing shows and continuing to work on developing our skills as performers and musicians; individually and as a whole band together.

Check out more information and music from The Haunted Hallows here!