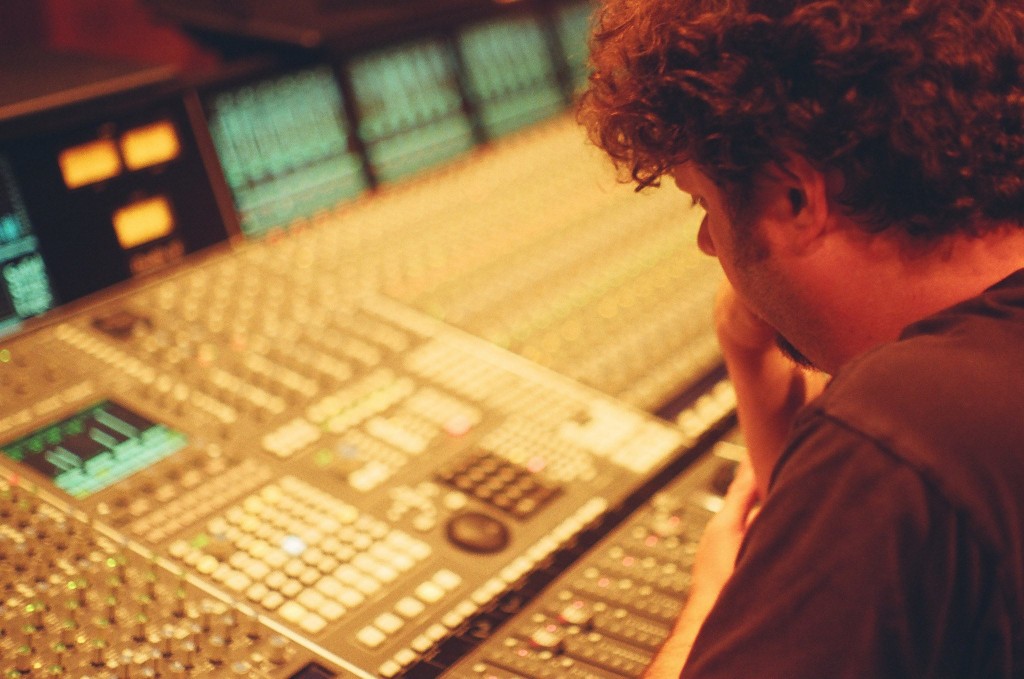 During his career as a record producer, Jim Dickinson worked with Bob Dylan, The Rolling Stones and The Replacements. When asked who he thought was the best producer ever, he said, “John Fry.” When John Fry needed to work on music for an upcoming Big Star Documentary, who does “the best” call in to help? Well, John called DMMC Music University panel speaker Adam Hill.

Not many people live and breathe rock ‘n’ roll as hard as Adam Hill.  Imagine putting in twelve hours mixing a record at the world renowned Ardent Studios, then immediately playing a two-and-a-half hour rock show to cap off your day! Just another day in the life of Adam Hill. Adam has worked with Jack White, Cat Power, Big Star and Klaus Voorman, just to name a few. I recently had the pleasure of working with Adam, and let me tell you he is the best in the biz at getting great sounds and telling funny jokes.

1. What made you want to sit behind a recording console and get sounds?

I didn’t want to get a real job, and music was the only thing I always enjoyed and understood best. First I wanted to learn how to play the music, then I had to learn how to make the records.

2. What do you think is the greatest sounding record of all time?

There is no greatest, but there are a lot of great ones. The White Album, Physical Graffiti, Spilt Milk, #1 Record, Radio City, No Dice, 100% Fun, Amorica, Odelay, 1984, Wish You Were Here, Siamese Dream, and a bunch of others I’m forgetting. I guess when I think of great albums I focus on great performances more than I focus on great engineering.

3. You are now playing with the legendary Memphis band, The Scruffs. How did that come about?

Well, Stephen Burns is really The Scruffs, and the band has gone through a few phases and lineups.  I assisted on a record, then I assisted and played a bit of guitar and bass and remixed another record, then I engineered and mixed and played guitar and sang backup on Kill! Kill!, which we had great fun with. The record’s foundation was the four-piece band cutting the basic tracks together simultaneously. Sure we punched a few things here and there, but the foundation was solid. Then we proceeded to mix it in mono and stereo. As I said, it was great fun.

4. What is it like going to work every day in one of the most legendary recording studios in the country?

I try not to take it for granted. It’s been an invaluable education.  At Ardent I’ve learned from people who for decades have been making records that get played on the radio. You don’t have that experience working in a home studio. I am also lucky to have access to analog machines and Pro Tools as well as numerous pieces of great vintage gear that are a joy to have at your disposal. I was a Big Star fan before I was hired, so to have had the opportunity to subsequently work on many Big Star releases with John Fry and Jody Stephens is very special to me as well.

5. You got to work on music for the Big Star Documentary, how did that come about?

When the Big Star box set was in the works, John Fry for some reason trusted me to go through the vault upstairs at Ardent and see what was there. As I scanned more photos and transferred more tapes I became the default archivist. It didn’t hurt that I was already pretty familiar with the Big Star and Chris Bell catalog. My involvement in the film grew from that.

6. What’s the coolest musical experience you’ve ever had?

Too hard to pin one down between all the guitar playing, engineering, mixing I’ve done, and all the live shows I’ve attended. Seeing The Black Crowes in a small club, seeing Prince at The New Daisy on Beale St., assisting John Hampton on The Raconteurs record, working with Klaus Voormann and Don Nix at Ardent, mixing Chris Bell material with John Fry.

7. If you had $1,000 to buy recording gear for a home studio what would you recommend?

2 SM57’s, some cheap pawnshop microphones, a cheap compressor, cheap two channel mic pre and a cassette 4 track or small digital mutitrack. Did I come in under budget?

8. Do you think you could have beat Elvis in arm wrestling, making you the King?

Hell no, Elvis is the King.

9. Are you looking forward to trying Des Moines’ barbeque?

I’m a foodie, so I’ll hold judgement and dive in.

10. Besides talking to me about great YouTube mash-ups, like this Beatles/Zepp Mash-Up, what are you most excited about talking about at Music University?

Analog recording and cutting as a band.