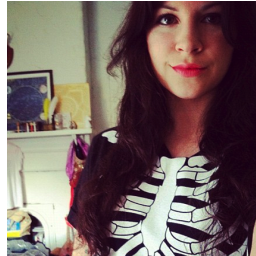 I met Alyssa DeHayes (Riot Act Media) a few years ago when she came to see my band the Poison Control Center at the Caledonia Lounge. To her it was probably an unmemorable meeting but to me, looking back on it, I have realized that she was probably the only person watching us that night who could understand from behind the scenes how hard our band was working that year. We played 284 shows and put out two records in 13 months!

You ask how she could understand, well let me tell you… Alyssa is a total renaissance women of rock n roll! She knows the behind the scenes from so many different angles. She is a publicist, record label owner, writer, is quite funny (see question 5 below) and is always the most fashionable gal at the show. She was even confused with fellow Music University speaker DEE DEE from the Dum Dum Girls at a show before! Let’s not mix them up in Des Moines!

1. What sparked your interest in becoming involved in the music world?

It’s hard to pinpoint any one spark. I’ve been infatuated with it for as long as I can remember, from making mix tapes off the radio as a kid, to absorbing every word from issues of Rolling Stone from the local public library. If I were in another line of work, I’d still spend my spare time on music in one way or another, so I’m grateful that my career allows me to be involved in so many aspects of it.

2. What made you want to start a record label?

The label started with Bambara. They had an amazing album (DREAMVIOLENCE) and no budget for vinyl. I felt this overwhelming impulse that this record HAD to be on vinyl. I’d worked with them on publicity for it, so I had a lot of faith in how well we worked together. They have great attitudes and are good at collaborating, communicating, and staying organized. I’d spent years helping labels release records from the publicity side so I wasn’t approaching it completely blindly, but it was still a big leap. As a publicist by trade and label owner by all other times, I basically committed to never sleeping again haha. There will be seven releases by the end of this year!

3. Who is the all time greatest musical fashion Icon both male and female?

4. What does your dad think of the new Beck album, and tell us a little why I would ask you that question?

I’ll have to send him a copy on vinyl and find out! My dad was a big music fan in college (he took my mom to see Jimi Hendrix as a date!) but immediately after college graduation, he was in the military and spending a lot of time oversees until his early 40s. That didn’t leave him much time for strolling through record stores or hanging out at shows. Besides the occasional Saudi bootleg or listening to the radio, he missed out on certain chunks of music history that I feel like he would have loved. We constantly trade records back and forth. I brought him The Monks, Joy Division… records that would of been considered more of “his era” than mine, but he skipped over them at the time. I really love and appreciate that he will ALWAYS listen to what I bring him, even if it’s something outside of his taste, like Circulatory System. Coming from a different place and time, he’s able to pick out influences in a unique way. I played him Maserati. He replied “Jan Hammer! Miami Vice!” a reference the guys enjoyed. Upon hearing Megafaun, he replied “these guys sound like a buncha beatniks… but they also sound like The Band. I like it!” Brad from Megafaun loves The Band so much that he has them tattooed on his shoulder. Parents DO understand! You can check out #dadsrecordreviews on Instagram for his pearls of wisdom!

5. Who is your all time favorite band, and give me your best P.R. pitch for them in 3 sentences?

Gloom Balloon is the solo project of indomitable force of nature Patrick Tape Fleming (Poison Control Center), joined by the unwavering passion and fervent soul of Christopher the Conquered. Influenced by a period of depression and met with the death of his musical hero Bill Doss of The Olivia Tremor Control, Fleming found new peace and purpose in creating and performing music again. Both deeply confessional and uplifting, Gloom Balloon translates your darkest moments into the best party you’ve ever been to: one where it’s okay to okay to hurt, and just as okay to dance, and we all exercise our personal demons while doing The Worm.

6. You go to a lot of music festivals, what’s your favorite in the country right now!

7. Tell us a bit about what you do for Sonicbids.

I write for Sonicbids “Ask A Publicist” column, providing insight and advice for bands, and applicable tips regardless of whether you’re doing it yourself, seeking a publicist to hire, or trying to create a more harmonious and efficient relationship with your current publicist: http://blog.sonicbids.com/author/alyssa-dehayes.

8. What’s the most exciting musical experience you have ever had?

I consider college my “musical coming of age.” Living in Athens and loving all things Elephant 6 ripped open a gaping musical portal for me as a college kid. One favorite memories is seeing a special screening of Major Organ & The Adding Machine at Cine, our local art house theatre followed by a performance from the Elephant 6 Holiday Surprise tour. Another big one for my college brain was going to my first DIY/basement show in Athens, which I think was Future Islands at the Secret Squirrel. Years later, Future Islands were the first band to ever thank me on liner notes, and I might have cried a little.

9. What are you most excited to talk about at Music University in Des Moines!

How to help people help you! If you want someone to do something for you, you should try to make it easy for them. A writer should not have to struggle to find your music or background info. Your fans shouldn’t have to search high and low to find your upcoming shows. There are lots of little ways we can all make things more convenient for each other.

Alyssa will be participating in the following panels at Music University…

Marketing on a Shoestring: Promote Like a Pro with an Indie Budget – Website Demolition Derby: Does Your Site Cut It? – Conversation with Dum Dum Girls.