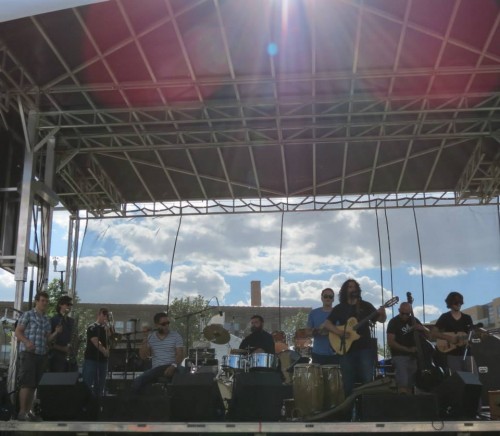 I saw the Parranderos Latin Combo (PLC) perform at the World Food Festival a couple of years back. They started playing and a few beer-clad listeners gathered around to see what they had to offer. The more they played, the bigger the crowd got. My family had come to visit and my parents, brother, best friend, partner and I were all noshing on some worldly dishes (in true World Food Fest fashion) at a nearby table.

I don’t remember the food, but I remember the music. It was the perfect setting for catching up with friends and family—which makes sense, seeing as the group began as a restaurant trio back in 2010. While they can take on the challenge of making memorable background music, these dudes know how to speed it up and make people dance. As my family and I told stories, there was one denim clad dancer that made his way to the center and quickly grabbed everyone’s attention with his semi-NSFW gyrations. The band took notice and started playing off of his energy. Watching PLC perform is truly an interactive experience and any dancer caught up in a Parranderos moment can vouch for that.

Lucky for us, PLC is adding to the DMMC’s best GDP line-up ever (in my humble opinion). You may have heard a bit of recent hype on their recording trip to Puerto Rico by means of a Kickstarter campaign. Successfully funded within a few days of the campaign’s deadline, the group—which, might I add, is quite an entourage with 13 members—headed off to create their first full-length album at Play Beach Studios in San Juan with two Grammy Award winners: producer Ramon Martinez and engineer Carlos Velazquez. So, until they release their new album, tide yourself over with their 8pm set at Wooly’s—and bring your dancing shoes.