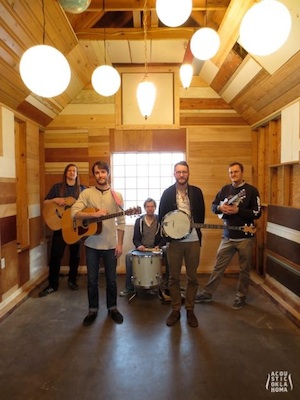 The Greater Des Moines Convention and Visitors Bureau will partner with local band, The River Monks, on an upcoming regional summer advertising campaign.

“The ads will embrace the Catch Des Moines brand—edgy, staccato, fast-paced—layering the vibrant cityscape with the abundant range of activities the city has to offer,” said Greg Edwards, President/CEO of the Greater Des Moines Convention and Visitors Bureau. “It was imperative the band’s sound matched the region’s lively energy, and the River Monks’ unique sound is the right fit.”

The River Monks were ultimately named after Des Moines, which translates in French as ‘The Monks.’ The namesake monks once trapped fish in the river now called the Des Moines River which means ‘La Rivière des Moines’ or ‘The River of the Monks.’

The call for entries also asked for community help in providing photos and video clips for consideration for the spots. Hundreds of photo and video entries were submitted to showcase things to catch in Greater Des Moines.

The summer advertising campaign featuring the River Monks’ music is set to run in Omaha/Council Bluffs, Eastern Iowa, Central Iowa and Southern Minnesota beginning April 22, 2013. The campaign is made possible by the support of the following advertising partners:

For a media kit with more information on the River Monks, visit catchdesmoines.com/summermusic.

The Greater Des Moines Convention and Visitors Bureau is a not-for-profit organization whose mission is to promote Greater Des Moines as a fun, vibrant and affordable destination statewide, nationally and internationally. Our focus increases visitors to our community through meetings, conventions, sports events, leisure travel, and group tours, thereby contributing to the local economy.