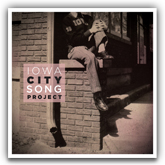 The Iowa City Song Project was commissioned by the historic Englert Theater, which has hosted American and Iowa legends alike in its 100-year history. Performers on the record include folk legends Greg Brown and Bo Ramsey, who both hail from Iowa City, and twenty-nine other acts ranging from soul to punk-pop to experimental. Mumford’s, the Poison Control Center, Pieta Brown, Christopher the Conquered, William Elliot Whitmore, Brooks Strause, and the Emperor’s Club are some current Iowa staples who recorded a track for the album.

Although simply growing familiar with this album takes time (it’s over 2 hours long with the eleven bonus tracks) and careful listening, it is well worth the effort. For those who have lived in Iowa City, it’s a priceless snapshot of one of the most vibrant cultures in the Midwest commissioned by its foremost performance space. For listeners like me who are less familiar with Iowa City, it’s yet another manifestation of the unusually collaborative and multifaceted Iowa music scene.

Though Iowa City is the record’s common thread, the album isn’t a cheesy, tasteless tribute. In fact, Iowa City isn’t even directly mentioned in some of the songs (although there are some explicit references in a few of the song titles; “Iowa City, Make Love To Me” probably wins). But you know it’s there, watching, a constant in an ever-changing musical landscape that continues to raise and inspire those who live and perform there. Some tracks reflect the quintessential Iowa City experience (“Old Capital City”), while others are delightfully introspective, as though the artist was in the process of unraveling his complex relationship with the city (“Summer Sun”). At times exhilarating, moving, and even bizarre, the Iowa City Song Project seems to contain all the ingredients of artistic life, from disappointment to passion to joy.

I caution listeners against viewing this record as the definitive guide to the Iowa City musicscape. Rather, it is a moment in artistic time that was captured and pressed into a double LP. If you want a definitive guide to Iowa City, become engaged with the scene yourself. See shows, meet artists, write original music. Make your own Iowa City Song Project.

Some highlights:
“Summer Sun” by Greg Brown
“Help Thy Brother’s Boat Across” by David Zollo & The Body Electric
“Strange City” by Brooks Strause
“Strings” by the Emperors Club
“The Sky is Our Mountains” by Mumford’s (on the digital download only)
“Run Johnny Run” by William Elliott Whitmore
“A Short Walk” by Rene Hell
“Old Capital City” by The Poison Control Center