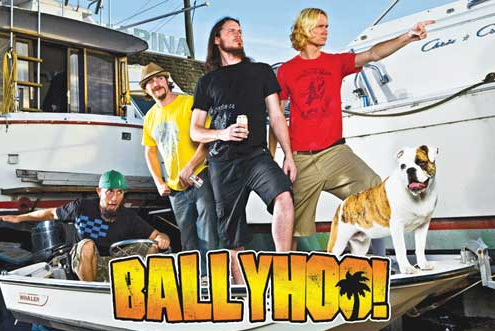 Our friends at Live Live Music are bringing two exciting shows to The Gaslamp in Des Moines next weekend, be sure to check them both both out!

A rock band with punk energy and pop reggae grooves, Baltimore’s BALLYHOO! are a fun, fan-loving powerhouse. These road dogs have tirelessly toured coast-to-coast taking their music to the people. Between the road and the studio, BALLYHOO! have crafted a sound distinctly their own; fresh, fun, and embodied by the soul of the party lifestyle. Lead singer and guitarist, Howi Spangler, has a reputation for mixing slick lyrics with his smooth but powerful voice. Drummer Donald “Big D” Spangler lays out the hard-hitting beats, which are underlined by JR Gregory’s funky and witty bass lines. Scott Vandrey (aka DJ Blaze) rounds it out on the turntables and keys.

BALLYHOO!’s unique sound, hardcore devotion to the road and their fans has pitched them into snowballing success. The band has performed with a myriad of national touring acts; 311, Slightly Stoopid, SOJA, The Dirty Heads, Matisyahu, and more. In 2011, after concluding the Last Calls and Liabilities tour with respected contemporaries, Pepper, they were honored with being included on the ever-popular Hollister Holiday Playlist. They were listed on MTV’s Top 100 Bands to Watch and even featured 2 downloadable songs on the popular video game ROCK BAND. Tour highlights include the 2011 311 Pow Wow Festival, the 2012 311 Caribbean Cruise, Bamboozle 2012, & the entire 2012 Vans Warped Tour.

“Against all odds, The Fatty Acids’ second full-length—which arrives just over a year after their debut—is neither a hasty rehash nor an unfocused departure. Instead, Leftover Monsterface manages to be quite different from Stop Berries, Berries and Berries, Berries while still retaining the band’s definitive sound. The new album is less polished in terms of production and hooks—and it’s a little weirder—but it widens the group’s sonic scope and doesn’t rob fans of anything they would miss.”
– A.V. Club Milwaukee

“The second record from the Milwaukee six-piece The Fatty Acids has the ambitious scope of a concept album, though it could just be an especially inspired stream of consciousness. Somewhere between The Flaming Lips’ epic neo-psychedelia and Sufjan Stevens’ Philip Glass-inspired marching band resides The Fatty Acids’ bizarro anthems and plaints.”
– The Shepherd Express

“The Fatty Acids’ summery sounds are at once carefree and raw; vocal harmonies soar above reverbed guitars and youthfully energetic keyboards, but where similarly-minded bands such as MGMT strive to be smooth and sparkly, the Fatty Acids like to rough it up a bit.”
-The Isthmus