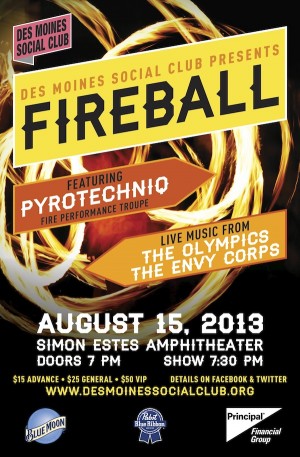 Two acts native to Iowa will play the Des Moines Social Club’s second annual Fireball on Thursday, August 15.  The show is returning to the Simon Estes Amphitheater featuring music from Envy Corps and the Olympics along with a firetastic performance from Chicago’s Pyrotechniq.

Hailing from Des Moines, 80/35 and GDP alum The Envy Corps is a must-see.  Their indie quasi-anthems filled with galvanizing arrangements and elasticized melodies have garnered the band the affection in the Midwest as well as internationally. Iowa City band, The Olympics, who have also rocked GDP in the past, combine indie rock and pop to create an unforgettable rock experience.

Make sure to give these killer Iowa bands a listen before you head to the show:

RSVP to the event and find more information about Fireball.