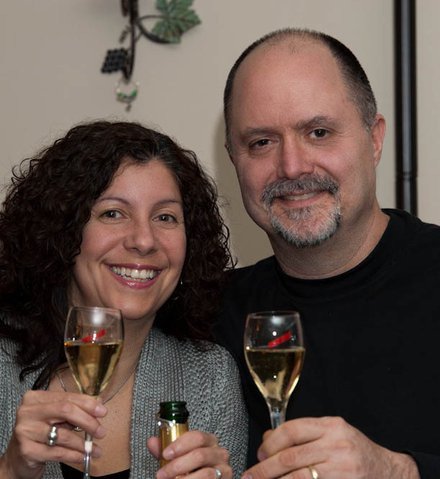 This year at Backstage Ball, to be held at The Gramercy Events Space at The Kirkwood in downtown Des Moines on Friday, February 28th, we will be honoring a number of individuals who have made a positive impact on the Greater Des Moines music community in the last year. In the days leading up to the event, we want to tell you about each of them.

Today we’re featuring Keith and Bonita Crowe, founders of local venue The Grapevine. (Thank you to Ann Klein for formulating a strong nomination, which you are about to read.)

Since 2008, the Crowes have hosted over 2,000 fans in house-concert-style shows at a small venue they opened as a wine tasting room in 2007. They currently host approximately 72 shows annually, featuring both local and nationally touring musicians.

The Crowes became interested in the concept after featuring Chad Elliott at a couple of outdoor concerts at their Des Moines home. “He was the one who introduced us to the whole house concert concept,” Bonita told me recently. “It was such a success that we decided to start featuring live music at our small office in Clive, and it grew from that into an intimate listening room.”

She markets all their shows via email, sending detailed notices to 1,787 individuals from a list she built herself, all through using word of mouth (true to the venue’s clever name) within the community.

Because they believe in supporting live music, the Crowes give most of the cover charge income to the artists they feature. They do sell wine by the bottle, but for reasonable prices, and they also allow patrons to bring their own bottles. They’ve told me privately that they struggle each month to keep the doors open due to their overhead costs. Notably, Bonita, Keith, and their soundman, Johnny Audette, all volunteer the time and energy they invest in running The GrapeVine.

“This is not a money-making business,” she told me. “We are doing this because of our strong desire to offer an intimate listening environment for musicians to share their music and our belief in supporting live music.”

The Crowes show a good deal of respect to artists they host and graciously ask fans to do the same. The atmosphere of positive, engaged listening seems to lift musicians to their highest levels, and it sparks some pretty cool surprises, too. At a show I attended once, James Biehn got ready to perform Son House’s “Preachin’ Blues” and realized he’d forgotten his slide. Somebody handed him a shot glass to use instead ‚which he did, totally nailing it.

Incidentally, Bonita quit her full-time job in February of 2012 to tour with Elliott as his harmony singer. They recently won the Iowa Blues Challenge Solo/Duo Competition and will head to Memphis in January to represent Iowa at the International Blues Challenge.

You can read more about the Grapevine in the following articles.