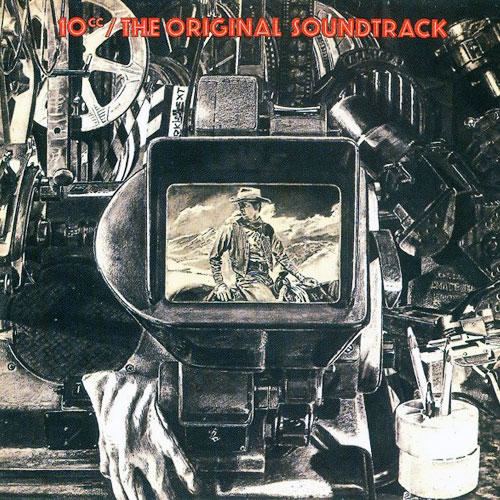 As the lights fell on Madison Square Garden on April 2, 2011 and before the greatest band of my generation (authors bias is noted and understood) took the stage for the final four hours of their existence, the farewell party for LCD Soundsystem was treated to a final calm before the storm.  An ethereal “I’m Not In Love” by the band 10CC seemingly paralyzed 15,000 before James Murphy whipped panda masked awkward teens and NBC sitcom stars alike into a roaring frenzy.

I was, of course, in my house, in Des Moines, affixed to my 12-inch MacBook and the live stream graciously provided by Pitchfork.com.  Yet it was a show and a moment permanently burned to memory; in some small part, fascinated with the choice of 10CC to give the unofficial eulogy.  When stumbling across this album, the opportunity to further dissect the rationale of Mr. Murphy was too great to pass on.

The album itself plays like a Queen-scored Broadway musical that flirts with Wings-era McCartney and ends with what I could only describe as a Monty Python influenced spaghetti western.  So basically things I typically either hate or have only come to appreciate after years and years of not trying.   Thumbing their nose at traditional arrangement and sequence, Side 1 starts with an eight-minute mini-opera that may or may not serve as the inspiration to Richard Linklater’s soon to be completed “Before” trilogy.  Don’t look to Wikipedia for support of this claim; these columns will include “facts” that are completely arbitrary but passionately defended.  Basically, this introduction makes me want to fence (with swords, not pawn shops) in Renaissance garb.

The very underrated “I’m Not In Love” comes next and transports me to a time of Xanadu and Bosom Buddies.  I do not know why this is, but for ¼ of this song I can’t get Peter Skolari in drag out of my head.  Still, I’ve always enjoyed the composition and love the fact that the loop effect used was identical to that featured in Billy Joel’s “I Love You Just the Way You Are.”  This obviously means Christie Brinkley and Peter Skolari had a love affair at a skating rink, thereby bringing complete sense to my entire train of thought.

Skipping over the last song of Side A and the first of Side B, one finds themselves at the intersection of high school drama club and “Wayne’s World” outtakes with “Brand New Day.”  It starts with the kind of groove and subtlety in a first dance of a 70’s shotgun wedding between two confused teens in a church basement.  And then it ends; but not as soon as it should.

“Life is a Minestrone” and “The Film of my Love” round out the album.  I had a friend in college who attended some private Chicago boarding school and would spend his Friday nights watching “Saturday Night Fever” while mirroring each and every step of cool that John Travolta gave us.  Though this brought about a handful of beatings at the time, the later payout was hordes of college women fighting one another for a chance to be the Mangano to his Manero. “Life Is…” feels like a song that should be part of that soundtrack, that stale beer soaked party, that strut.  (Again…my column…I can throw a “Staying Alive” line into a “SNF” reference if I so choose.)

The end track on “The Original Soundtrack” asks a fairly philosophical question – what came first, 10CC or the Rhumba synth drumbeat of my grandmother’s Wurlitzer Orbit III?  I’ll let you go to Gram’s house and find the answer yourself.  And while you’re there, help yourself to a tchotchke.  Plenty to go around.

You can find this, and thousands of other rare gems and free nostalgia rides, at ZZZ Records, 7 days a week, at 2200 Ingersoll Avenue.  They also have CD’s.  And a few tapes.  And a non-functional arcade game that my daughter refuses to believe is broken.  4 year olds…they just think they’re smarter than everyone else.

Chris Knauf is an upstanding citizen of Des Moines and lover of Iowa music. He serves diligently on the all-volunteer board of the DMMC.