Home » News » Thrash for the Masses 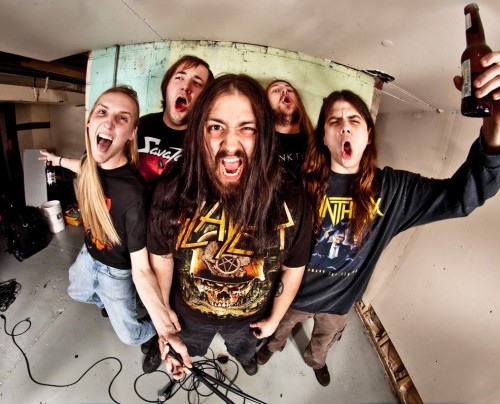 Dark Mirror, one of the 515’s hardest working bands, is helping to bring Metal back to the capital city.

The band, led by bassist and founder Marco Battaglia, was young and in an early incarnation of its lineup, but still hoped to impress the crowd and the headliner. After the show, Battaglia approached Overkill lead singer Bobby Ellsworth and gave and gave him a copy of the first Dark Mirror CD.

Ellsworth looked at Battaglia with a smirk and told him, “Thanks kid. I’ll use it as a coaster.”

Battaglia laughs and recalls the moment fondly. He knows it was nothing personal, and recognizes that when Dark Mirror opens for Overkill at Wooly’s on Feb. 24, they are doing so as a much more mature and seasoned group.

“We put in a lot of work and energy into this,” says Battaglia. “We earned the show this time.”

The idea started for Battaglia back in middle school: Create a metal band that draws from multiple influences and styles, play a shit ton of shows, have fun making music, and do it as often as possible.

In 2005 this dream took shape in the form of Dark Mirror.

Since then, the lineup has changed several times, but Battaglia’s vision has remained steadfast. These days, with a solid lineup that meshes well and pulls from a set of influences that is nothing less than bizarre, Dark Mirror has evolved into one of the heaviest and hardest working bands in Des Moines.

The bands first gig with this lineup — and the first ever for Taylor — was an opening spot for one of the most popular and respected thrash bands to appear in recent years — Portland Oregon’s Toxic Holocaust.

Since then, it’s been a blur of shows for the band, opening for the likes of Skeleton Witch, Impaler, Bonded By Blood, Holy Grail, Havok and many others — not to mention the innumerable local and regional shows they’ve played and hosted in this time.

In addition to gigging almost constantly, the band is now in the midst of recording a full-length album. This is the first album with this lineup but their fourth overall. The band previously released a Self Titled EP, and two other full-length recordings, “Visions of Pain” and “Portrait of Evil.”

“Only recently have I decided to put on the business hat,” says Battaglia. “This has always just been something I do, but if you want to keep doing it and doing it right, sooner or later you have to do that.”

Recognizing his effort, the Des Moines Music Coalition will honor Battaglia at the Backstage Ball on February 22 for his work in promoting and helping build and support the music scene in Des Moines.

And though Battaglia may be the ringleader of the Dark Mirror circus, the desire to create and nurture a vibrant scene is shared among all the members of the band.

“When I was young I listened to music and cranked up the volume and it helped me blow off steam,” explains Taylor. “It always made me feel like I was part of something bigger and it provided a sense of camaraderie among those of us who listened to this type of music. That is what I want to achieve. I want to help the audience feel that same sense of connection. Being part of something like that is huge.”

While fans and band members at metal shows remain awash in the classic denim and leather, it is not unusual to find Battaglia on stage during a gig completely out of uniform. Rather than a black shirt with indecipherable lettering, he’s sometimes found bouncing around the stage sporting a light colored Warren Zevon shirt. He also admits to being a fan of Peter Gabriel, Tom Petty, and Billy Joel. He once took a girl on a first date to a Smokey Robinson concert (for which he claims to have won ultimate first date points).

The rest of the band shares diverse musical tastes as well: While Taylor grew up on classic metal that his mom listened to (Diamond Head, Sabbath), Blomker, the band’s drummer, is a fan of the Grateful Dead.

And while all of the members come together as fans of the wide ranging genre of Heavy Metal, they have trouble finding a band they can all agree upon. After a couple moments of consideration, Battaglia and Taylor decide that only Iron Maiden and Judas Priest make the cut for everyone.

“Our differences make us whole,” says Battaglia. “They make us unique and help round us out as a band. There’s no doubt that we are ‘metal,’ but beyond that, it’s really up to the listener to further classify us. A fan of classic New Wave of British Heavy Metal (NWOBHM) hears that style, a thrash fan definitely finds those elements, fans of death metal, metalcore and every other sub-sub genre of metal find something in our sound to call their own as well.“

This diversity, says Battaglia, makes Dark Mirror stronger than each of its individual members. And this is the same view he and the rest of the band take of the music scene in Des Moines as well.

“We want to do what we can to make a scene in Des Moines or we wouldn’t be here,” says Battaglia. “We may not love every band out there, but we’ll support any band that helps grow the scene. That means music in general, not just metal. It has to be that way in a town this size. We all have to help support each other.”

The Metal scene has had many champions in Des Moines over the years. Bands like Black Market Fetus and their former frontman Nate Phillips in particular have been instrumental in keeping the scene alive over the years. Phillips booked bands at the Botanical Center, at the Fallout Shelter, at homes, bars, venues big and small and anywhere else he could line up a show even if only a handful of friends were going to show up. He introduced Metal Up Your Tap to Des Moines and has been a friend to not only the metal scene, but to hardcore bands, punk bands, and any musician or group who needed any kind of support and knew to ask him.

Phillips continues to bring bands to town, promote shows, and help build the scene. And he’s not alone. Dead Horse Trauma, Painface, As For You, and many other bands and individuals are also actively working to make metal more of a force to be reckoned with in Des Moines.

“Nate Phillips is incredible, “says Battaglia. “He’s a true music guy — one of the few in this town. He is a bad ass and a vital resource for this town.”

But for sheer visibility, quantity of shows, and outreach, Dark Mirror are currently leading the charge (though they might not claim this themselves).

“I think it’s great that there is a local band that is actually responsible for booking some shows,” says Phillips of Dark Mirror. “So many bands just try to get on other shows and then don’t do dick to promote it and complain when nobody is there. As the opening band it is your job to get people to come to the show. That is the only reason you are there, it is not because you are awesome or even good. I like that that Dark Mirror guys make an effort to flier and spread the word when they are playing.”

“It would be wrong to say we brought the scene back in Des Moines, we can’t and won’t take credit for that, but we helped,” says Battaglia. “We were the ones who said, we’ll play with a cover band, a pop band, whatever you’ve got.”

Dark Mirror is not only willing to share the stage with anyone; they also go the extra mile to ensure a great show. Last fall, the band booked, promoted and played at the Underground Rock Shop with Southern California’s Bonded By Blood — another of the New Wave of Thrash Metal bands making a mark on the national scene.

But beyond the show itself, the band, led by guitarist Garan Drozd in this case, created a full day of the event with a cookout at a nearby home that featured burgers for a buck (unless you were short of cash). Those in attendance walked to Linn’s grocery store for beer then milled around the yard cooking cheeseburgers, passing a bottle of Jack Daniels and the occasional joint between sets.

Bonded By Blood hung out long after the show and said it was one of their best stops on the national tour they were undertaking at the time.

You just don’t hear that very often in this town. But Dark Mirror is working hard to make that the rule rather than the exception.

“It is so important to the touring bands that the locals make a good show for them,” says Phillips. “I know from being in a touring band — you start to resent the bands because they all say the same thing: ‘I don’t know why nobody is here, the scene sucks right now.’ But you know they just didn’t do a damn thing because there is no flyer at the venue and sometimes the venue does not even know you are coming. So props to any bands that put forward that extra effort to make a good time for everyone because that is truly what this is all about, it’s not about money or being famous or popular or any of that crap. It’s about having an excuse to get together with like-minded people and forget about the troubles of daily life.”

Building upon the success of Phillip’s monthly Metal Up Your Tap shows, Battaglia and Dark Mirror created their own series of metal shows —Midwest Metal Madness. They play most of these shows, rarely taking money for performing or booking — and never taking a dime before the traveling band gets paid.

“They’ve all been a success in that traveling bands got a fair amount of money and we introduced some new bands to the area,” says Battaglia. “Even if you don’t like us as a band, if you work with us we can make it good for everyone,” says Battaglia.

The upcoming show with Overkill, Battaglia and Taylor say, is important for the band. It’s one they’ve invested a lot of time, energy and money into to make it happen — all of which they’ve done with the hope of introducing metal to a wider audience in Des Moines.

“We need more help from music fans that are willing to tell people about shows,” says Battaglia. “Even if you can’t go, or a certain show is not your type of thing, spread the word to others who might be interested. Get people to show up at the venue. It’s what we do and what we hope others do as well.”

Battaglia recalls another instance in which he shared Dark Mirror’s music with another high profile metal band — Germany’s Helloween.

“The venue played our CD before their show and I gave our CD to their singer,” he recalls. “He looked at me and said, ‘My advice? Grow up and make a new album.’

You can listen to Dark Mirror online at www.facebook.com/darkmirrormetal or at a venue near you just about any week.