Many musicians will remember the first songs they wrote and recorded—probably with a tape recorder in a bedroom, or perhaps in a friend’s basement on a four-track cassette. The songs themselves are presumably a bit ramshackle but none-the-less heartfelt; the true artist will still shine thru even during the most primitive stage of a songwriter’s career. This is the case when you listen to Kansas City’s Shy Boys. 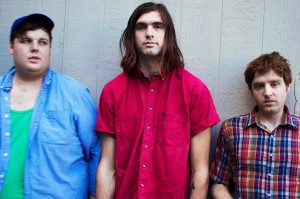 Formed by two brothers, Colin and Kyle Rausch, along with their roommate Konnor Ervin, the three-piece debuted their low-key style on their self-titled album—their first—released earlier this year. Recorded live with single-tracked harmony-laden vocals, the songs represent the virgin work of a band that decided to form before any of the members had ever picked up an instrument. The echo-machine’d indie surf pop of their coastal counterparts Best Coast, Beach Fossils and Real Estate is evident, but all-the-more surprising when you consider the group hails from a city 1,500 miles from the nearest beach.

Be the next to catch Shy Boy’s wave of landlocked surf music at this year’s 80/35.