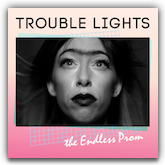 “The Endless Prom” is an endless pop hit

Towards the end of last year, Trouble Lights released their first album titled The Endless Prom – a very fitting name considering that there isn’t one track that fails to make you bob your head and fight an urge to dance. With the fantastically well-produced beats produced by Philip Rabalais, singer Adrien Daller provides some incredibly clean and catchy vocals throughout the album.

In the opening track titled “Truu Love”, the Trouble Lights duo create the atmosphere that will cover the rest of the album through sounds that are very reminiscent of acts like Lady Gaga and Crystal Castles. From then on, each song hooks you in and makes you stay listening. With tracks like “Hunting”, Daller really highlights the electronic sounds with driving yet appealing vocals that thrive in the party-like scene that is running the entire album. The next track, “Fire Night”, continues with the rave vibe and never lets up. On this track especially, Daller’s voice holds this subtle power over the music in the background that both compliments it and reacts to it.

The real culmination of the album, however, falls on the seventh track titled “Ride This Horse”. It opens up with a steady build of intensity through the combination of Daller’s repetition of the lines “You spin, I go in, I go in” and the rapid growth of sounds brilliantly laid out by producer Rabalais. The rest of the track is just a constant explosion of sounds and haunting vocals that create an incredibly driven and exciting track, both for dancing and listening.

The album ends on a track titled “Grey” with a more somber and simpler note. Rather than keeping with the constant excitement and intensity from before, “Grey” provides a very well-crafted relaxation of sounds and vocals that works for a great ending to the album. After the high-inducing rave felt from the previous tracks, this track felt like it was a fitting and perfect ending to a night out of dancing and partying.

For any listener of pop and dance music, The Endless Prom is exactly what they are looking for in all avenues of the music. The vocals provided by Adrien Daller are hauntingly stunning and Philip Rabalais’s production on every track is virtually flawless. For such a young duo early in their careers, their talent shows incredibly well in this fantastic piece of electronic-dance music.

You can find the album through their Bandcamp, iTunes, or through Maximum Ames Records. You can also see Trouble Lights at 80/35!