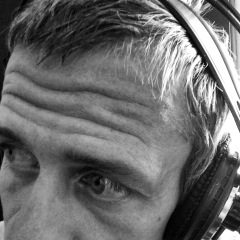 Like a lot of ‘80s kids, Patrick Tape Fleming grew up on John Hughes movies. In fact, the Gloom Balloon and Poison Control Center frontman can blame Ferris Bueller for the way his life has turned out. From the moment Matthew Brodrick took to that parade float, wailing to “Twist and Shout,” in Ferris Bueller’s Day Off, Fleming was hooked. “The energy showed he had fun playing it and I wanted to have just as much fun,” he says.

To capture that energy, Fleming decided he would create a band with the people closest to him: his friends. He launched The Poison Control Center, which was an Iowa institution for over a decade. More recently, he started Gloom Balloon with friend and Christopher the Conquered mastermind Christopher Ford. His love for creating has propelled him to become even more involved with The Des Moines Music Coalition from just working behind the scenes in the beginning to now a panelist for Music University.

DMMC: What was the first album you remember buying? Do you think that album had any influence in your musical career?

PTF: The Beatles singles 1967 on a cassette.  I remember listening to it so much that I wore the tape out. It wasn’t until 1989 that family bought a CD player and then I bought it on CD. Definitely I listened to “Here Comes the Sun” and “Strawberry Fields Forever” relentlessly. I was hooked. I read every Beatles book and watched every movie documentary about them, even the ones that aren’t good. I was pretty obsessed.

DMMC: What is the biggest lesson you’ve learned launching both The Poison Control Center and Gloom Balloon?

PTF: If you’re going to start, make sure that your goals are clear. Friendship is before everything. That’s one thing you don’t see with a lot of groups today. We stayed friends before anything else, where as a lot of bands break up and hate each other a year after.

DMMC: How important do you think music and the arts are in fostering in the creative growth of young people?

PTF: It’s the most important in the world! They tell people to play music to pregnant women because the vibrations of sound will help in the development skills and they will be better at math and science. If that’s the case, music rocks, man. And you know it just gives them an opportunity to do something and create, that’s why my friends and I do it. I’ve become more outgoing and have learned so much stuff because of [music].

DMMC: How did you get involved with the Des Moines Music Coalition?

PTF: I’ve always supported being a musician and I’ve always been someone who wanted to help others and volunteer. I also enjoyed going to [Music University]. I worked behind the scenes before I became a panelist. You know, you get a lot of information from all angles like looking for a booking agent, which I will be speaking about this year, to how music is made and presented to how you get it on the road for tour. And it’s not just for people who just play or have a band it can benefit those who are involved on the social media side as well.

DMMC: What advice would you give to an up-and-coming band or solo artist in the Des Moines area?

PTF: Do it for yourself at first. Don’t worry about getting a record label deal, or booking agent. Do it for you. Learn how to do all the stuff they do and learn how to do it well.  You will be a bigger asset because you can do it yourself. And remember nobody is waiting to scoop you up under his or her wings to make you a star.