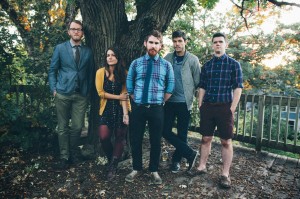 There isn’t a work day that goes by where I don’t spend a solid hour listening to Parlours. There’s something about Dana Meinch’s (you may know her as Dana Halferty) angelic voice mixing with Steve Bergeron’s clear melodies that makes me ultra-productive and light as a feather at the same time. Just give “Slowly from the Earth” off of their newest release All is Here a listen—around 3:15 you’ll see exactly what I mean. I’m sure I’m not the only one who has them on every Spotify playlist—they’ve been noted by World Cafe’s Bruce Warren, The Chicago Tribune, and Dave Curtis of Direct Current Music/Sony BMG. Oh, not to mention their song “I Dream of Chicago” was featured in the ending credits of TV show Chicago Code.

The lyrics are charming, the rhythm section has been compared to the Cranberries, but my favorite description of the group goes to Daytrotter: “Lead singer Dana Halferty (Meinch) seems to enjoy the opportunity to be the thick blanket for others, breaking out a cool, smoky voice that us never overbearing, but sultry, hitting you like a sack of down feathers.” And when you really think about it, there’s nothing better than being nailed by a sack of feathers. Make sure to catch them at this year’s 80/35 music festival.