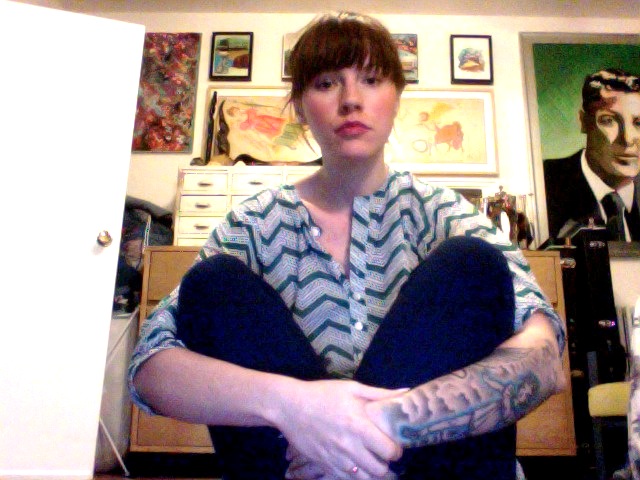 Joan Hiller is a music industry renaissance woman. Joan owns and operates Riot Act Media in Brooklyn, NY, where she, along with her phenomenal team, publicizes bands, music-related books, and music-related films. She’s been a music publicist for 14 years (first in Chicago at Hopper PR, then in Seattle at Sub Pop Records, and now with Riot Act), a club booker, a tour manager, a tour booker, a fanzine maker, a freelance writer, a music business speaker/consultant and also a visual artist. She is the perfect all-around speaker for our Music University conference on October 19th. I got the opportunity to ask Joan a few questions.  I found out that Joan is very kind and humble when talking about herself, but wait till you hear what she compares Steely Dan to.

And get a kick out of her cameo in this Benjamin Gibbard (of 80/35 alums Death Cab for Cutie) music video:

1. I love your art! You even did the cover art for Ben Gibbard’s solo record, Former Lives. Tell us a little bit about how that happened and where people can see more of your art.

Hey, thanks so much for the kind words! They are truly appreciated. I am very thankful and honored that Ben asked to use that painting (which is called “There 26” and was purchased by my father before Ben asked about it–it hangs in his dental practice in Houston) for his phenomenal record. The fantastic Kate Harmer of Hum Creative handled the graphic design and layout; to be involved with anything she touches was an honor, too. Ben, who we should all aspire to be more like, and I have been in each others’ lives for a pretty danged long time–14 years or so at this point, which is crazy! We’re all getting old! To see or–dare I say–to buy more of my work, folks can visit joanhiller.bigcartel.com and/or joanhiller.com. People in the New York City area can also rent some of my pieces via Artsicle.

I’d tell her to read Jessica Hopper’s excellent “The Girls’ Guide To Rocking”, which is a treasure trove of advice written specifically for young women like her by the woman who taught me how do do what I’m doing for a living.

3. Great publicity can make or break an artist. What’s one thing a band could do DIY-style that would help them get their name out to music writers and bloggers?

Well, I wouldn’t necessarily say that any one piece of the puzzle–having a great press presence included–can be a maker or a breaker for anyone; satisfaction, achievement and disappointment are such fluid and personal concepts. Musicians and creatives all have different goals and wishes and dreams they want to bring to fruition and paths they want to follow, and those things may or may not involve having a presence in the press space. If I had to pick one thing a band can do to help get their name out to music writers, it would be this: write the greatest, best, most interesting-to-you music that you can possibly squeeze out of the cells of your mind-body. Prioritize your craft and your skills and never stop putting that first. Once you’ve gotten something together musically that you’re really proud of, I always, always recommend that bands handle their own press, promotions and marketing themselves until they absolutely cannot do it anymore and need to outsource. Start regionally–find other people in your locality who are making things you respect; get to know the writers at your local weeklies and dailies. Find local bloggers and email them; follow them on Twitter (but for Jah’s sake, do not pitch them there). Play shows; invite everyone you even remotely know out to every show. Start your own little press database and band newsletter; get on Bandcamp, use SoundCloud, have a good website that’s designed well and doesn’t make you look like a goober unless gooberism is yr thing. Form relationships organically, over time–but also hustle, hustle, hustle. The more seriously you take what you’re doing and the more authentically you present yourself, the more likely it is that others will take notice.

That’s a tough one! Putting on my first club show with my fake ID as a kid in Houston? Standing three feet away from Yoko Ono at Elysium at SXSW ’11 while she looked directly into my eyes for five seconds and scream-sang? Getting to sing (poorly) with the Postal Service in Spain in ’03? Getting to sing & play guitar (even more poorly) with Owls on their ’01 European tour? Getting to sing (a little less poorly) on Dave Depper’s The Ram Project in ’11? Deciding to go opposite the flow of fist-swinging dudes in the pit at a FEAR show in ’94 to see what would happen? I DO NOT KNOW.

5. Who is your all time favorite band and give me your best publicity push for them in under 3 sentences!

No hesitation on this one: Steely Dan. I don’t even want to contemplate the existence of a universe where I’d have to push for someone to listen to The Dan. Either people are in or they’re out, just like on Project Runway.

6. The same week you will be in Des Moines speaking, your company Riot Act Media will be hosting a CMJ showcase in NYC. Can you spill the beans on who will be playing that this year?

Absolutely! This October 17th will mark our fourth year having a CMJ early evening showcase at Pete’s Candy Store, which is this great little jewel box of a place staffed by rad people; it’s cozy, and there are places to sit. Our CMJ shows there are intentionally low-key so that people can come, relax, have a beverage of some sort and spend time at a smaller neighborhood place between going to bigger bar/club shows filled with a ton of folks who may or may not actually be there to listen to anything. This year’s may be more packed than usual for us, however–although we’re still solidifying the lineup, we can confirm that TORRES, Jay Arner, and Norwegian Arms are going to play. The great Team Love records is hosting their CMJ showcase immediately after ours; some of our clients will be playing at their showcase, too.

7. What are you most excited to talk about in Des Moines on Oct. 19?

I’m most excited to consult with people about whatever music-related issue is on the table for them! I really love having productive conversations with people about how they might gain clarity and figure out what next steps can be taken to move towards what they want for themselves artistically and/or professionally. I’m always game to talk with others about publicity, best practices, entrepreneurship, and any old thing, really. I will also be excited to talk with my brilliant and often hungry fiance, Matt LeMay (who is also speaking at the conference) about what delicious food we are going to find while in Des Moines.

You can hear Joan Hiller speak at this year’s Music University conference on October 19th, and even set up a one-on-one consultation with her at the event! Check out the full schedule here, then register here. Discounted rates are available for students and performing musicians.

Read this great article about Joan.

Learn more about Joan at joanhiller.com.