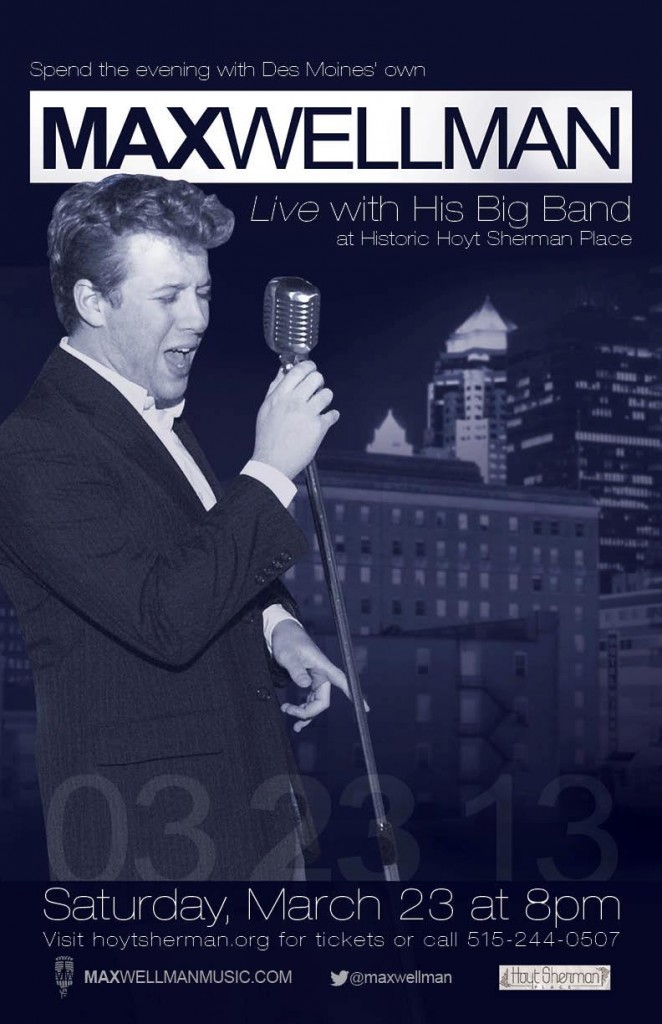 The Hoyt Sherman Place theater, originally built in 1923, is celebrating its 90th birthday this year, and to honor this special occasion, Max Wellman will reprise his fantastic big band show at Hoyt Sherman Place on Saturday, March 23, 2013, at 8:00 PM.

Hoyt Sherman Place was named after Hoyt Sherman, who owned an insurance company in Des Moines and was also an Army paymaster during the Civil War. Sherman built the house, which is now a historic mansion, theatre, and art galleries. After his death in 1904, the building was left vacant until the Des Moines Women’s Club began using the house as their clubhouse in 1907. Throughout the years the Club hosted many speakers, such as Amelia Earhart and Helen Keller. With a large interest in the club there became a need for space to host these speakers and activities; in 1923 a 1,400 seat theater was built on the East side of the house.

Hoyt Sherman Place is excited to host local sensation, Max Wellman, in honor of the birthday celebration. Wellman debuted in Des Moines in 2009 with his first album, Comes Love.  Wellman is a jazz vocalist who has headlined for events such as Des Moines Jazz in July and Des Moines Art Festival. Reviewers have called him “A naturally gifted singer; true talent; and a performer with poise and confidence far beyond his years.”

Three years ago Wellman sold out Hoyt Sherman Place with his big band for the live recording of his second album. This year the show will be video recorded by Dan Welk of Click! Photography. Patrons can expect to hear a mix of popular standards such as “My Funny Valentine” or “Time After Time” mixed in with original and lesser known standards, such as Wellman’s “Left Behind” or Sinatra’s “I’m A Fool To Want You.” This performance will feature Des Moines legend, Tina Haase Findlay of bella soul and many more special guests.

This exciting celebration takes place on March 23, 2013 at 8:00 PM. Tickets are $20 per person. Tickets can be purchased at the Hoyt Sherman Place Box Office, Ticketmaster.com, by phone at 800-745-3000, or all Ticketmaster outlets.