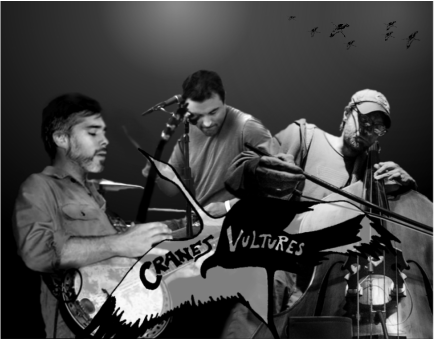 Dubuque indie-folk/rock trio, Cranes/Vultures, create original acoustic music using folk instrumentation in an adventurous style. Their poignant songs hint of alt-country, indie, and even progressive rock. Singer/songwriter Nate Jenkins entices the listener with his strings and vocals, whilst engaging in bewildering harmonies with the percussionist, Brad Cavanagh. The trio strengthens with the addition of double bass player, Josh Engler, and his irreplaceable riffs. Together, they place Cranes/Vultures on a musical plane of their own, yet all too wonderfully recognizable.

“The raw music of Cranes / Vultures contains a power that will not only get you to *gasp* dance, it may also cause you to incessantly hum its melodies and hooks throughout the week. Heavily recommended.”

Nate Jenkins has written music in various projects, sharing the bill with great musicians such as Andrew Bird, Gaelic Storm, Charlie Parr, and Andy Goessling from Railroad Earth. The trio released its first collection of studio recordings in August of 2015, an EP titled TWIG. Overall, TWIG is tight, notably catchy, and illustrates the distinct and desired sound of Cranes/Vultures.

“I listened to [TWIG] and immediately added the EP to our current section for airplay.”

Beyond the scope of the studio, Cranes/Vultures, based in Dubuque, IA, play various live venues around the Midwest. They deliver a loop-laden, harmonized, entertaining show. The trio roars and rips through their original material, leaving the crowd endlessly humming their tunes.

To learn more about Cranes/Vultures, check out their Facebook page