Kris Adams’ beats will make you dance—the vocals will have you hooked. While most rap ensembles tend to be lyric heavy and rely on featured guests, Adams stands up to other hype all on his own. More spoken word than anything, he commands the stage in a modest way—playing off of the audience and keeping it focused on the music. One of his debut performances at GDP 2013 bought the rapper a crowd and new fans. Since then, he’s kept busy with regular performances around Des Moines at favorites like The Standard Martini Bar and the Vaudeville Mews. The Austin transplant may have been considered more of a producer in the South, but in Des Moines he’s regarded as a performer—one of the many differences he’s found in his time in the Midwest. He shares more in an interview with Juice: “One of the first shows I saw here was Maxilla Blue, and they’ve become one of my favorite hip-hop groups in Des Moines. The indie scene here is lovely and the art scene is really beautiful. The pace is slower, but there’s a lot of untapped markets.” 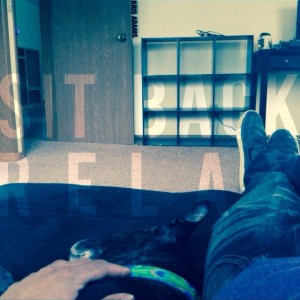 While you can catch all kinds of remixes on his Soundcloud page and off of his EP Dark Matter, you should see two new albums out from Adams at some point soon. Until then, catch him at the 80/35 music festival.