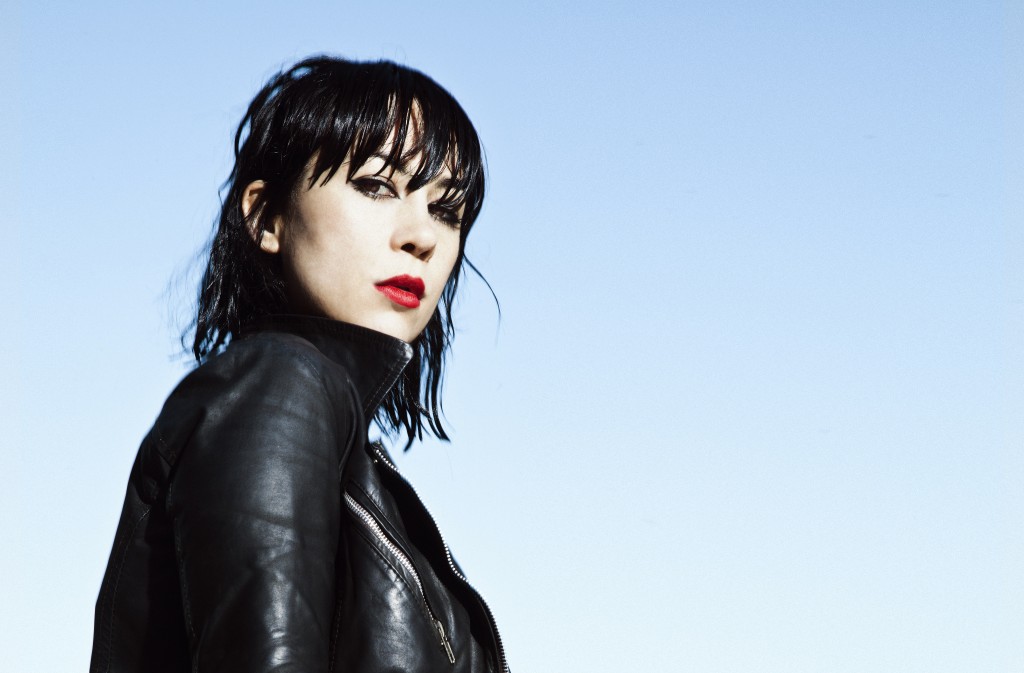 The vocal polyps changed everything. Dum Dum Girls founder Dee Dee Penny had been in the midst of her own creative revolution. She had written a dozen songs in a frenzy. She had tracked all of them at California’s East West Studios, capturing the lush and layered Pet Sounds vibe that made the studio famous. And then: nothing. She got polyps. Her voice gave out. She couldn’t sing. She couldn’t record. She couldn’t tour. She had to just stop. “I couldn’t sing at all,” Dee Dee says. “All I had was a pretty instrumental record.” And for six months she listened to that instrumental record, rethinking her songs, rethinking her approach, rethinking everything. By the time she’d healed, Dee Dee had reimagined her entire band. She took a few minutes to talk about the Dum Dum Girls’ latest album, Too True, the retooling of the band, and her presentation at this year’s Music University.

DMMC: You’re leading a workshop on minimalist songwriting. For you, what do you achieve stripping away all the excess on a song?
Dee Dee Penny: There’s something that’s really interested when you’re limited to one chord. It’s somehow both limiting and freeing because it forces you to do interesting things with melody that if you were working with a more standard chord progression you wouldn’t. In that case you might have a more static melody because it’s being informed by the chord change. With one chord, you have a whole scale to work with.

DMMC: Do you like working in that kind of a bare-bones structure?
DD: To some degree. I’m not a great guitar player. When I first started Dum Dum Girls I learned guitar barely enough to write two- or three-chord songs. It’s been enough years now that I’m a better player. I’m able to try more things. I used to make a joke that with each new release I introduced a new chord I was capable of playing.

DMMC: When you launched the Dum Dum Girls the music industry was going through—and continues to go through—a real revolution that has affected everything from how records are released to how bands interact with their fans.
DD: That’s the one thing that has really increased since I start Dum Dum Girls: How direct the relationship can be between artists and fans and how powerful that is. One of the first bands that I remember that took off out of nowhere without the resources of a big label were The Arctic Monkeys and Adele. Because of the Internet and the power of Internet hype, they became contenders with Top 40 bands. That’s not the world I live in, but for me to put up three songs up on MySpace and then a year later sign a three-record deal with one of the biggest indie labels (Subpop), it’s pretty indicative of the power and potential of the artist.

DMMC: Do you think that changes the how artists can look at their careers?
DD: You aren’t at the mercy of a record label to some degree.

DMMC: You also own a small label, Zoo Music.
DD: Yeah, I have a small label with my husband (Crocodiles’ Brandon Welchez). We put out records that few people hear and others that sell more than my records. It’s really just about the talent and the luck hitting that sweet spot.

DMMC: Looking at that equation from the label side, what is it that clicks?
DD: There always seems to be that thing. I still think that exists. You see someone performing and you can see that they have it, that thing that sets them apart. But that’s no guarantee. It’s really just timing. You can hire the same publicist for two different records, and both in your eyes can have that indefinable artistic quality, but you just throw them up and see if one catches.

DMMC: Is that you, in a way?
DD: I look at my success as an accidental miracle. When I started Dum Dum Girls the choices I was making musically and stylistically was just at the cusp of a wave that overtook indie. So for me it was right time, right place. If I’d started a year later, I might have been overlooked. If I started a year later, I would have fallen in the shadow of the other bands that were starting the return to lo-fi. So it’s all really timing.

DMMC: With Too True, you’ve made a lot of deliberate choices, really tying together everything from your videos, to your stage show, to the clothes you are wearing.
DD: It’s the most intentional record I’ve ever made, even though it didn’t start out that way. I had a rough couple years and I felt like there was something new brewing in me, but I didn’t have the time to sit down and figure it out. Normally I write over the course of a year, collect 20 songs, and then go through those to see what makes a good album. And I had done that before I realized that this record needed to be something born of one moment and one frantic energy. So I sat down and over the course of 10 days wrote the bulk of the album.

DMMC: So did that make you rethink things beyond the music?
DD: I felt that I had made a significant enough step forward musically that I wanted to reestablish the esthetic—or the whole thing, really. … It’s a little annoying to be pegged as this all-girl retro throwback garage band. I’m like, ‘Are you fucking kidding me?’ Arrggh. So I was trying to take back the control of the perception. And that meant really dialing in what we wanted to convey and how that umbrella-ed over everything we did, from the videos to the album art. Even though we’ve had a pretty natural esthetic, it grew organically, which is maybe why I felt like I had lost a little of the control. This album was about taking that back and making a strong statement.

DMMC: Do you think you achieved that?
DD: The thing about my band—it’s always been this sort of vague solo project meets band. It’s my thing. I write and record the music. But then there’s the band. And there is definitely a band. But there’s a grey area: How much is me and how much is the band? With this record I wanted to reestablish that the Dum Dum Girls are whatever I feel it should be.

DMMC: It probably helps that your music is generally personal.
DD: For the most part I write what I know because I don’t know of another way to be convincing and authentic. That’s just what happens. But for me being the huge music fan the songs that define my life are the ones that feel like my experience, even though I don’t think I’m going through the same thing. That’s the beauty of music: It’s a loosely defined conversation between you and listening and your interpretation depends on where you are at the moment.