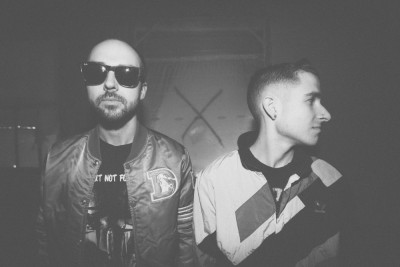 When Danny Heggen heard Mickey Davis’s music, he thought it was magic.
Heggen and Davis first met when the latter, an electronic artist behind the one-man band Home Is, remixed a track by Seedlings, Heggens’ folk band. Davis replaced the banjo chords and acoustic riffs with his droning electronic keyboards, giving the cheerful folk music a disco funk. Blown away by Davis’s ability to mash together two seemingly different ends of the musical spectrum into one captivating track, Heggen insisted they meet. Soon after, the duo formed a new band, MAIDS. It’s been a whirlwind of shows, DJ sets and recording sessions since.

On their creative process and balancing music and life
Heggen: Almost 90 percent of the songs I’ve written on an acoustic guitar, and then I’ll record two tracks, one guitar and one vocal. Then I cut out my guitar track, and I’ll just email Mickey my vocal track…and he takes just my voice and composes a completely new song.

Davis: Because Danny sends me demos and then I just work on them, our rehearsals are just going over lot of things we’ve already been working on. We spend a lot of our time when we’re in practice just talking about our days. We’re friends too, and that’s really what makes us a really special thing.

On their distinct sound
Heggen: I guess as a writer I can’t help but be influenced by everything that’s around me, and that’s the Midwest. The style of electronic music is kind of like, ‘I’ll dance with you, but I’ll sit down and have a slice of apple pie with you too.’ It’s friendly and really approachable. There’s this Midwestern-ness where it’s like I just want everybody around me to feel good, and I want them to want me to feel good too. And disco is this movement in the music where it’s like, let’s just get everybody together and have a good time.

Davis: Until I worked with Danny, I never really cared about the listen-ability of what I was creating. I was just trying to work for a certain mood, and all the songs I was making were, like, eight minutes long. They were very dense and heavy and they were just however I was feeling at the time. … I think I was too caught up in the artistic pursuit of this intellectual thing and now I’m just making music that makes me feel good, and that’s awesome.

On their favorite things
Heggen: Our favorite thing is to play a show and then just DJ all night long. We’re just essentially throwing a dance party, because really our goal was to bring all of our friends to the same room just to have a good time. Music for us is a way to connect with people and ourselves, so let’s just play music that we’re really into and just have a blast. We’ve done a few of those and they’ve turned out really well, so we’re just looking for every opportunity that we can to not only perform but to really take over the atmosphere of a place for the night.

Davis: It really is just a dance party where we invite all of our friends to come hang out. It’s taken me, in terms of what shows we’ve been able to play and the audiences, to find that it’s been more than I ever thought it would be, and that’s a really cool feeling.