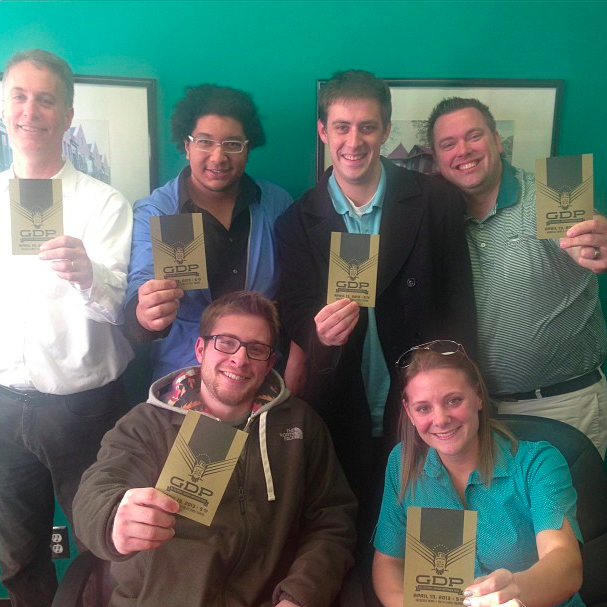 Disclaimer: This is an old photo of past GDP volunteers. We’re too busy to take a new one!!

As a volunteer-driven organization, DMMC depends on our dedicated community of supporters to produce programs like 80/35, Summer Music Camps, and Music University. Gross Domestic Product (GDP) is a festival of high-community involvement run by one DMMC staff member and a team of passionate volunteers in support of the local music scene. The following interview will introduce you to two volunteers who were paramount in the planning of GDP 2016 and will give readers insight to how GDP runs behind-the-scenes.

Lindsay: What has been your past involvement with DMMC events?

Ben: I’ve been volunteering with GDP and Little BIG Fest (LBF) for the past few years now. I’ve volunteered for small roles at 80/35 and Music University, but LBF has been my home for the past two years, working as Volunteer Director. I’m so glad to be back working on the team for GDP.

Lindsay: Becky had not been involved in DMMC events before, but was chosen as the Community Curator because of her passionate dedication to the Des Moines music scene. For years she has helped book touring bands in various venues around Des Moines and supports the scene by adding local bands to the lineup. How did it feel to be selected as the Community Curator for GDP 2016?

Becky: I was extremely flattered. If people want to see diversity in events in this town, then participation is a way to make the music scene more inclusive.

Lindsay: Diversity is one of the goals we discussed when we first sat down with the volunteer selection committee. We wanted to see diversity in genres and diversity in the people who would be interested in attending this year’s festival. What were some other goals you had for GDP this year?

Ben: I want to always be pushing for the fest to be bigger and better. Last year’s festival was incredible; the team this year had a lot to live up to. Lindsay Keast and Becky Kessel have put together an amazing line-up, I couldn’t be more proud of the work everyone is putting in to this year’s festival.

Lindsay: What aspect of GDP are you looking forward to most?

Becky: Of course the bands. All of them. I also appreciate the range of styles and the multi-generational nature of the bands.

Becky: I think that Iowa, Des Moines in particular, has such an amazing and diverse music scene. I think people tend to disregard us from the outside and even people who live in this community don’t think to pay attention to the music we have here at home. We are lucky to have such a great and ever-growing community of performers. We need to do everything we can to support it so it will continue to flourish.

Ben: GDP was founded as a showcase of Iowa music, but it isn’t just about championing great Iowa artists. It’s about celebrating what a great music scene we have.

Lindsay: It’s true; our music scene is really supportive. Not only do we have talented bands, dedicated fans, and awesome volunteers, but overall community involvement we’ve seen for GDP 2016 just blew me away. GDP has been supported in so many ways with a street team volunteering to hang posters, a generous donation of sound equipment for The Blazing Saddle stage from Guitar Center, and various other local businesses donating their time, products, resources, and space. This is truly a community-run and community-supported event.

Want to get involved with DMMC festival planning? There are still volunteer opportunities available for GDP 2016! If you’re interested in planning future events including 80/35, Gross Domestic Product, Music University, or Little BIG Fest, email us at info@desmoinesmc.com for information!