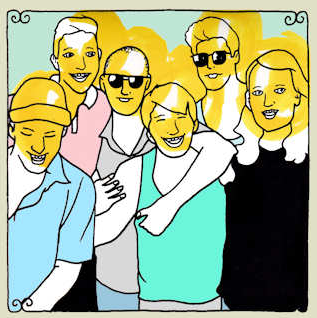 The Olympics could be given a lot of genre names — personally, I’ve heard “pop”, “post-myspace punk rock” and “dad rock” used before — but, first and foremost, they’re an experimental band. It just doesn’t seem like they are because they never break any of their beakers with their experiments. It’s what happens when a band is full of such talented and careful musicians — they can get away with almost anything.

Like the extended jam session that fills the second half of “Gypsy Blood” — it sinks into the unconscious mind, the way a good jam song should go, with a heavenly reverb that eases the song into a slower pace. Yet it’s still consistent, with Jeffrey Roalson’s boy-next-door vocals making the song feel important and strangely heavy.

Another track on Barefoot Blondes, “L.A. Gold” somehow walks the line between “chillwave” and “jam band” and the balance they strike is just great. The most fascinating part, though, is that the song comes immediately after “House,” an intense and heavy indie rock song that could easily be confused in a line-up with the early Strokes catalogue. Yet the passage between those songs sounds great and natural.

But it’s like I said earlier — The Olympics can get away with almost anything. And they’ll still sound freaking amazing.

Check out The Olympics:

This article was written by DMMC volunteer contributor Maxwell Johnson, who you’ll also hear DJ’ing on KRUI, the most excellent college radio station at the University of Iowa.