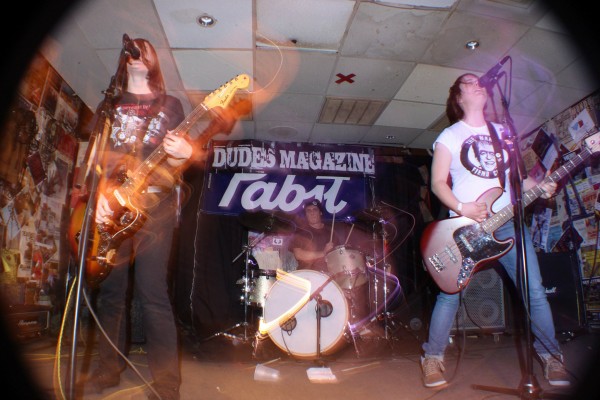 Lipstick Homicide plays GDP on April 12th. Click here to buy passes to GDP before March 28th and save 50%!

Hair is flying everywhere over what I thought were two high school girls. A young guy behind them making faces that would look like extreme pain if he wasn’t smiling.

Despite the hair all over her face, the blonde is shredding wildly on her guitar, adding nice high harmonies that play well with the lead singer’s deeper voice. Short, exciting solos sporadically shooting out of those blinding fast hands!

Catchy, thumping basslines come from an instrument that almost looks too big for the short brunette. With a sometimes painful expression, she sings using a ferocity and energy that shouldn’t come from someone that small.

Meanwhile behind them, the thin young guy is pounding out a strong punk beat, despite the fact that his goofy smiles are the only thing letting you know he’s not having an epileptic fit.

This was my first impression of Lipstick Homicide two or three years ago at The Space’s anniversary show in Ames. It was a short 20 minute set, but I was blown away and hooked! I found out I could fall in love with a lesbian couple and straight guy!

And in the years since, I’ve seen them multiple times, including at my 50th birthday party! And the band’s live show has just become tighter and stronger. I think they are best thing coming out of Iowa! So if you enjoy fun, catchy pop tunes done in a hard, punk style, this is a band not to be missed!