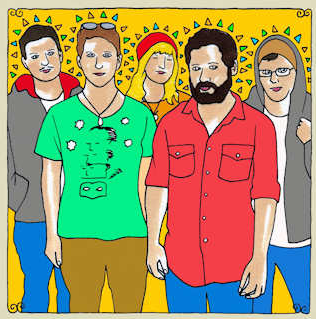 Gross Domestic Product is my second favorite event of the year (behind 80/35, tickets on sale now!). I love getting all of these local bands together in one gigantic event and I love being able to learn new things about bands that have been right under my nose this whole time. This year’s event, held on April 13, is the biggest one to date. A move to the Fourth Street venues allowed the festival to expand to 19 bands spread across three stages, and two more stages dedicated to a special open mic and some of Des Moines most well-known DJ’s. Some of it is even free, so there is no excuse to miss it.

Last year on my blog, I did a feature called GDP Song of the Day where I reviewed one song from each of the acts. This year, I, uh, didn’t. So, I figured to help spread the word, I would talk about two of the bands, one this week and one next, that I haven’t really discussed. This week is Land of Blood and Sunshine, who play at 7:15 at Vaudeville Mews.

Land of Blood and Sunshine is a name I have seen for a long time, but I only know of one time where I actually caught one of their sets. I remember enjoying it a lot, making a mental note to talk about them in public, and then promptly forgot because I can’t actually make mental notes because I will forget them. It is lucky that they decided to release a new album,Servants of Light, and I had fresh material to work with.

Servants of Light plays like the soundtrack for the creepiest carnival ever. There is a certain circus quality to some of the arrangements, and at other times they sound like The Doors, but if they replaced Ray Manzarek with the Grim Reaper. As if the music couldn’t be creepy on its own, the vocals are presented like a dark choir. On this album, Land of Blood and Sunshine sound like a band of marauding gypsies, coming to steal gold and souls.

Now, that may sound like a bad thing, but man, I had a lot of fun listening to it. Land of Blood and Sunshine are so different from what I normally listen to and so different from anything I really come across. They are very unique and oddly beautiful at times. They feel familiar, like a recurring nightmare that you wake up from in a panic, only to be reminded that you’re alive. They have both the panic and the relief all built in.

Check out Land of Blood and Sunshine:

This piece was originally published on desmoinesisnotboring.com. It was written by Dave Murphy. Read the original article here.