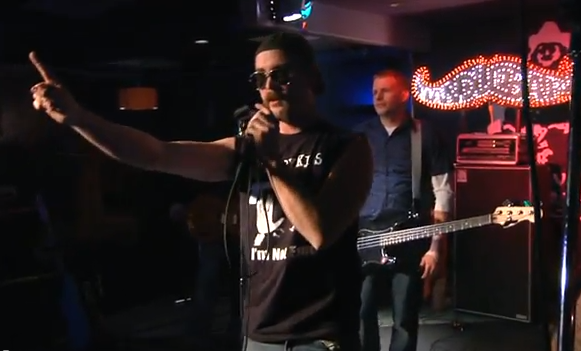 “I love fly fishing with my nephew.” These are the simply strange and perfectly poetic lyrics that are whispered through your headphones at the beginning of the self-titled EP from the Des Moines band, Handlebar. If your ears didn’t perk up after that odd statement, then they will when the guitars slide in with the instantly catchy riff that starts off the opening track, “Pink Pocket”.

Handlebar can come across as a “get drunk and party” rock group, and rightfully so, their logo sports the band’s name formed to the shape of a mustache (get it?). And don’t leave out the majority of photos on their Facebook page that just feature random people with varying facial hair.

Hilarious antics aside, once the music starts, the group matches this absurdity with a loud, brash, and tightly performed sound that is accomplished through catchy lyrics and heart pounding drums and guitars.

I’m impatiently waiting to see Handlebar rock the Vaudeville Mews at this year’s GDP. The band’s guitar riffs and commanding vocals will nicely complement the urge I will have to jump up and down in the middle of a mass of several sweaty fellow Iowans. I would highly suggest grabbing Handlebar’s EP and turning up the volume in your car in preparation for the show. Can’t wait.