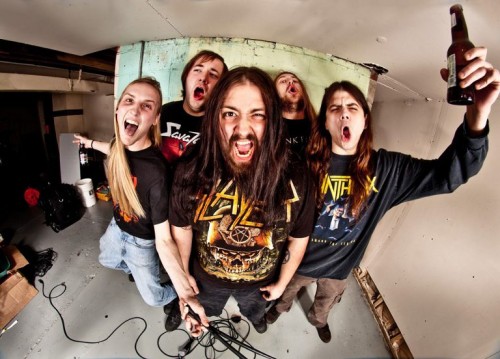 NOTE: This article previously ran on Des Moines In Not Boring

I grew up and spent my teen years listening to a lot of metal and hard rock. Some of my teenage concerts were with bands like Metallica, Megadeth, Sevendust and, of course, Slipknot. As I aged, though, my tastes just drifted away. I still like some occasional hardcore and quick punk, classics like Minor Threat and newer bands like FIDLAR still find its way into the rotation fairly often.

While a band like Dark Mirror isn’t my current cup of tea, there are a lot of things I like about them, and a certain part of me can appreciate them. They are an obviously talented band, and that shines through with each song. Dark Mirror has a lot of hints of early metal pioneers like Judas Priest and Iron Maiden. The vocals are tight and melodic, while also sneaking the more occasional modern throaty metal grunt. Neither style comes off as strained or forced. It blends naturally with the music.

Musically, they thrash around between quick riffs and tight solos and instrumentals. It is a nice blend, and someone who maybe wouldn’t always listen to a band like this can accept and understand why someone else could. Metal bands and bands with quick guitars like this always tend to put on an amazing live show. As someone who doesn’t play an instrument, I really appreciate how fast the fingers move while still maintaining their sound.

Dark Mirror seems to be the perfect band to introduce their style to an audience who maybe isn’t used to it. Talent such as theirs can trump almost any sort of genre bias.