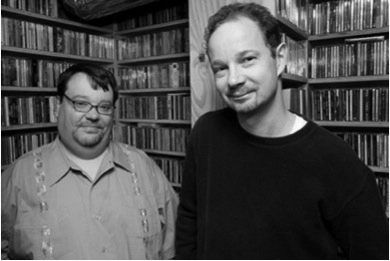 Jim DeRogatis is more than just a musician. Though he is the drummer for Vortis, an indie-rock band, his true calling is journalism. His work has been featured in the Chicago Sun Times, Rolling Stone, Request and Spin. He also co-hosts the weekly music-review gone radio show, “Sound Opinions,” with Chicago Tribune music critic Greg Kot. Here DeRogatis talks writing, sex tapes and the Beatles.

Music University: Where did your love for music come from?

Jim DeRogatis: I fell in love with music as a pre-teen. To me, writing about music opened my eyes as much as listening to it. I discovered rock critic Lester Bangs and realized there was this whole world outside of my lower-middle-class background. It was falling in love with the music, listening to the music and then reading great, passionate writing about it that helped me put it in context.

MU: How did you begin writing about music?

JD: I wrote record reviews through high school. I wrote for fanzines: do-it-yourself eight-and-a-half by eleven Xerox magazines. Before there were web blogs, if you wanted to share your enthusiasm and your passion for music, you had a friend who put a magazine together or you did it yourself. You went to Kinko’s in the middle of the night and ran off 500 copies of this ‘zine on a friend’s keycard, and then you handed it out. That’s what I did. I interviewed Lester Banks as a senior in high school, and it was two weeks before he died. Something he said to me was, “I’ve always been a fanatical fan with fanatical opinions to inflict on people.” I bought records obsessively, I played music obsessively and I wrote about music obsessively.

MU: What is the biggest music story you’ve covered?

JD: I’d like to say Nirvana; it is the most important band of my generation. But probably when this 26:39 videotape arrived in my mailbox at home, showing R. Kelly having sex with a 14-year-old girl. That’s probably the one. It’s not nearly as much fun as saying Nirvana.

MU: What crossed your mind when you received the video?

JD: I had done an investigative story with the court reporter at the Chicago Sun Times of Kelly’s pension pursuing illegal sexual relations with underage girls, and it had come out a year before that videotape surfaced. We thought we had shown that this guy was hurting people in a very bad way—whether it was Aaliyah or a lot of girls whose names were never made public because they were statutory rape victims. The videotape got him indicted, and of course it took seven years to go to trial. He was acquitted by a jury of his peers, but the verdict of “not guilty” does not necessarily mean innocent at all. Ask O.J. What went through my mind is this guy is really hurting people. I sat with these young women who had slit their wrists after these relationships with Kelly. You’re not a journalist if you don’t see corruption, or wrongdoing or people in a position of power hurting people who have no power. You’re not a journalist if you don’t pursue that.

MU: What’s the biggest misconception about breaking into the music industry?

JD: I love the Beatles, I wrote a book with Greg Kot about the Beatles and the Rolling Stones—but the Beatles have ruined several generations of musicians with this notion that you’ll be the biggest band in the world and you can be a superstar or even just you can make your living on playing music.

MU: How has the music industry changed since the time of the Beatles?

JD: We have tools now with the Internet to reach more people. The fact that this little iPhone in my pocket has more power to record music than the Beatles had at Abbey Road, but also more power to distribute music than Capitol Records had at the height of its power with the Beatles heyday, this is amazing. We’ve only begun to explore the possibilities of that, so this is an incredible gift that humankind has not had in its history.

Jim DeRogatis is presenting with Greg Kot on Saturday, Oct. 17 at 1 p.m. in the Cowles-Kruidenier Auditorium at MU: A Conference and Showcase for Musicians October 17, 2015.

Register for MU today at music-university.org