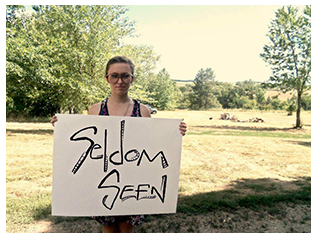 So right now I’m sitting in a car driving through the hill country of southern Arkansas and for some reason it made me think of my time up in northeastern Iowa about a month ago for Seldom Seen Fest. Well, it’s not really “some reason”. It’s a very specific reason, which is that I’m surrounded by natural beauty on a mission to share extra-natural experiences with other human beings. Tonight I’ll attempt to be the catalyst, but I’ll go into it with confidence, because Seldom Seen helped to remind me that every individual in a space dedicated to art is part of the creation; there is no line between audience and artist, all are both.

A background: Seldom Seen Fest is a music/literature/visual art fest out on a big old farm near Monmouth, Iowa. 2013 was the fest’s third year, technically. Apparently the first year was more of just a big party, which I guess was so great that everyone involved decided to start selling tickets. Pretty organic, and it shows. The festival goes for two days and two nights, and visitors camp out, hang out with others around a massive bonfire that burns the entire damn time (more on this later, it’s important), walk beautiful trails, watch and listen to musical artists, hear readings from poets and authors of all sorts, and take in a variety of visual art, from huge video projections on the sides of barns to handmade shelters made entirely by hand from resources found on the grounds of the farm. And it’s pretty much all interactive. Like, there’s pretty much a feeling of everyone can do whatever they want to do. This farm seems so detached from the real world that the next-level feeling of freedom is pretty much automatic from the moment you get out of your car. The weekend is full of possibility. Maybe you’ll fall in love or dance to 90s music in a barn with 20 strangers until the sun comes up or hell, you might even end up sleeping inside a tree with a live owl. Or a dead owl. Or whatever. Truly. Whatever. You’ll almost definitely fall in love with someone or something.

So I’m in this place and finding myself spending a lot of time around this fire. It’s where everyone goes when they aren’t quite sure what to do with themselves. It’s where they bring back their inspiration from the art that surrounds them, in the darkest corners of the woods and dollhouse DJ dioramas and beating drums and lyrical incantations of poets and songbirds. Time disappears and all is one. No one wants to sleep and for this brief flash, no one needs to. There is always something to propel you into the next moment.

This fire is burning on and what happens around it is burning. Existential pondering filters into pop culture jokes and into another swig of something sweet and into eyes rolled, averted, locked, and smiling. No one seems to know why exactly they are at this festival, which is intimate to say the least. A couple of hundred people who heard from a friend of a friend that they should go. It’s the first week of college without, well, the college. This is New World University, offering the following courses: Living In The Moment 101; You Can Do It, Too: A History of Why You are Just as Great As Anyone Else Who Ever Decided To Do Something; and Explorations of the Meaning of Why Not? And the fire is the commons. It’s study hall, the library, the quad. It’s the beacon. It is that little unknown something that is inside each of us that are in this place, it’s why we were all there. We made that fire. We were the artists. We were an artist. The Artist. As The Artist, we created a new reality of collaborative creativity and positive energy, not necessarily a model for living so much as for remembering how to live. I’m keeping it with me, seldom seen but always known.

Chris Ford is an Iowan musician and encourager of writing in any/all tenses as the next word calls for. Want to volunteer to contribute to this website? Contact us!