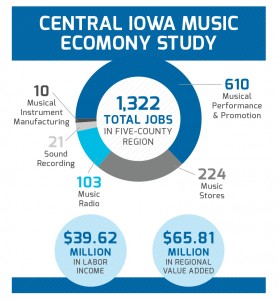 Central Iowa’s music industry accounts for more than 1,300 jobs in the area, adding more than $39 million in labor income and $65 million in regional value, according to the Central Iowa Music Economy Study. The survey was commissioned by the Des Moines Music Coalition (DMMC) with research done by Iowa State University economics professor Dave Swenson.

“The Des Moines music industry has an identity and is having an impact on the area,” says Amedeo Rossi, 80/35 project manager. “I think this shows there is something substantial going on here.”

The study shows that music is a large part of the entertainment economy in Central Iowa and helps contribute to overall quality of life, which draws more and better workers to the area and helps to retain young people.

“A thriving arts and culture community is an important part of recruiting businesses to Central Iowa,” said Jay Byers, CEO of the Greater Des Moines Partnership. “A robust music scene is critically important to attracting and retaining top talent.”

Read the article in The Des Moines Register.