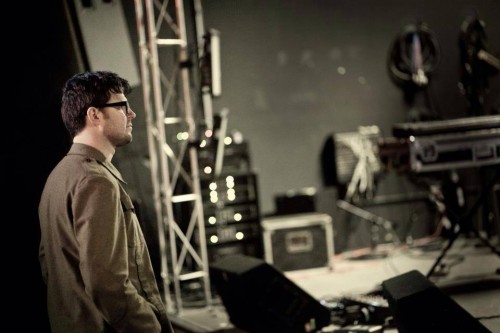 Brandon Darner knew he wanted to pursue music the moment he watched Eddie Van Halen shred his guitar on a series of library tables in the “Hot for Teacher” video. “[Seeing that video] is one of my earliest memories…of knowing music was special,” he says.

While Darner still rocks out as the guitarist for The Envy Corps from time to time, his music dreams have morphed a bit. Based primarily in Des Moines, he now produces records for other bands, most notably Imagine Dragons’ hit debut album, Night Visions. Between gigs, Darner shared his experiences as a member of Music University’s producer panel last year. This year, Darner will moderate a panel on music and film, as well as lead a workshop on integrating the use of analog tape with digital recording platforms.

Warm cup of coffee in hand, Darner sat down and shared his thoughts on everything from inspiration to Music University.

On musical inspiration:  “I grew up on the Beatles, singer/songwriter stuff, [and] music from the ‘70s, as well as the ‘50s and ‘60s. I always had a deep love of music, and I always wanted to listen to music in the car at a young age. Music would make me cry and…touched me in a way that a lot of other things didn’t. Music provides freedom.”

On being in a band:  “What a band offers is a set of ideals and a belief system [and]…a depth of collaboration, I think, that can’t be matched by people doing it on their own. You know, if you’re a solo artist and you bring in musicians to collaborate with, there’s something to that [which] can be great, but…the collaboration that can exist in a band is something that’s kind of hard to get in the same exact way if you’re not in a band. All of us make each other better.”

On producing:  “As a producer, I do have a certain signature that I leave on every song, [but] helping make the song better…is more important than, like, ‘Hey, I used that reverb on the drum sound, like I always do.’ I think a lot of people go into producing thinking that if they don’t add those tricks to the record, no one will know that they did it. But what people do know and do recognize is that if every record you produce is really good, they, at some point, have to correlate it to you. The biggest way you can tell a producer’s good is to listen to anything by the band before he worked with them, and [ask], ‘Is there a difference? Did they reach something they hadn’t gotten to before?’ That’s something I always notice. And if you’re good at it or if you have any skill at it, producing is still really hard because you have to find a way to tell an artist that something they feel really passionately about…is [not] good enough still. That’s the hardest part.”

On success:  “A lot of [musicians] peter out and give up right when they should’ve pushed those final few moments before success. I know so many people that quit right when it could’ve happened for them. The key that I would stress to people is not ever stopping if you believe in something. I can’t sit here and say, like, ‘I did steps 1-273 and that’s why I produced this multiplatinum [album].’ All I can attribute it to is always trying to get better and not ever stopping.”

On Music University:  “It’s purely educational; you can learn so much from being a part of it. It will literally be impossible for you to come to this and not take something really positive away for your own music. You will absolutely walk away from MU more emboldened to keep playing. Music University… has a really positive [message] to help musicians keep struggling to make it, [and] I’m happy to be a part of it.”