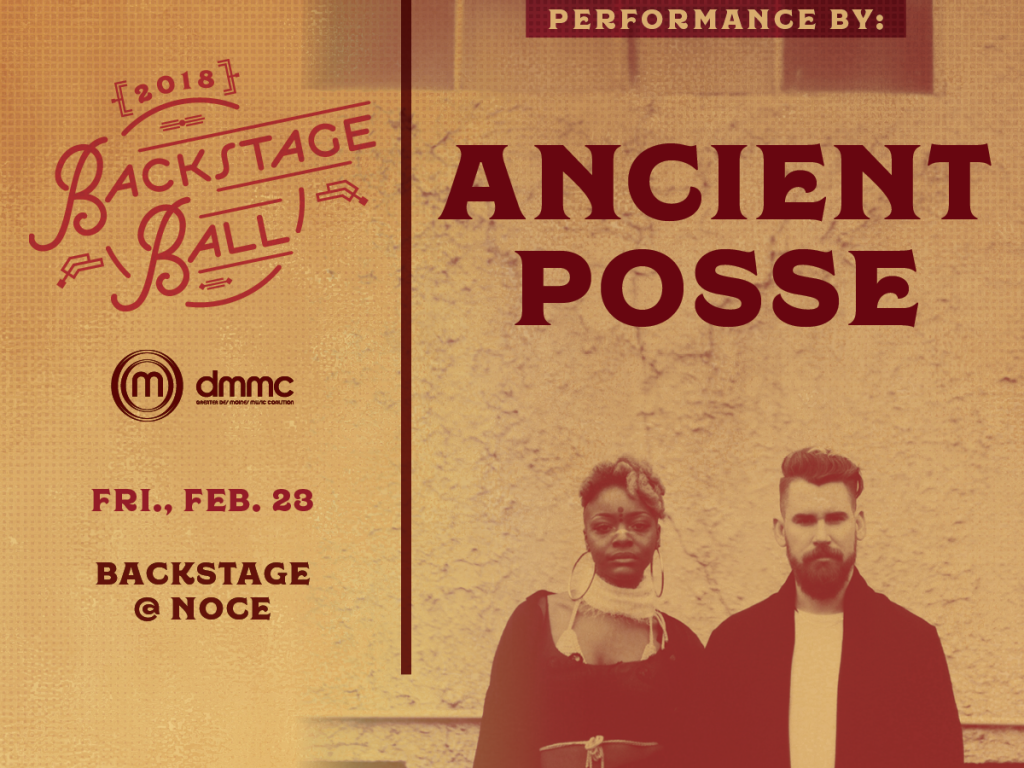 Anyone who’s caught an Ancient Posse show can pay testament to their gripping performance. Kamillah Camp-Bey slides across the stage, her distinctively colored hair trailing every twist as she contorts her body to partner Steve Bergeron’s soaring keys. They’re performers through and through. Every show as gripping as the last. The duo’s played just a handful of live shows since emerging onto the local scene last year, but they’ve made quite a splash. With a debut LP slated for release in 2018, Ancient Posse is just getting started. We caught up with this year’s Backstage Ball headliner to get the inside scoop. 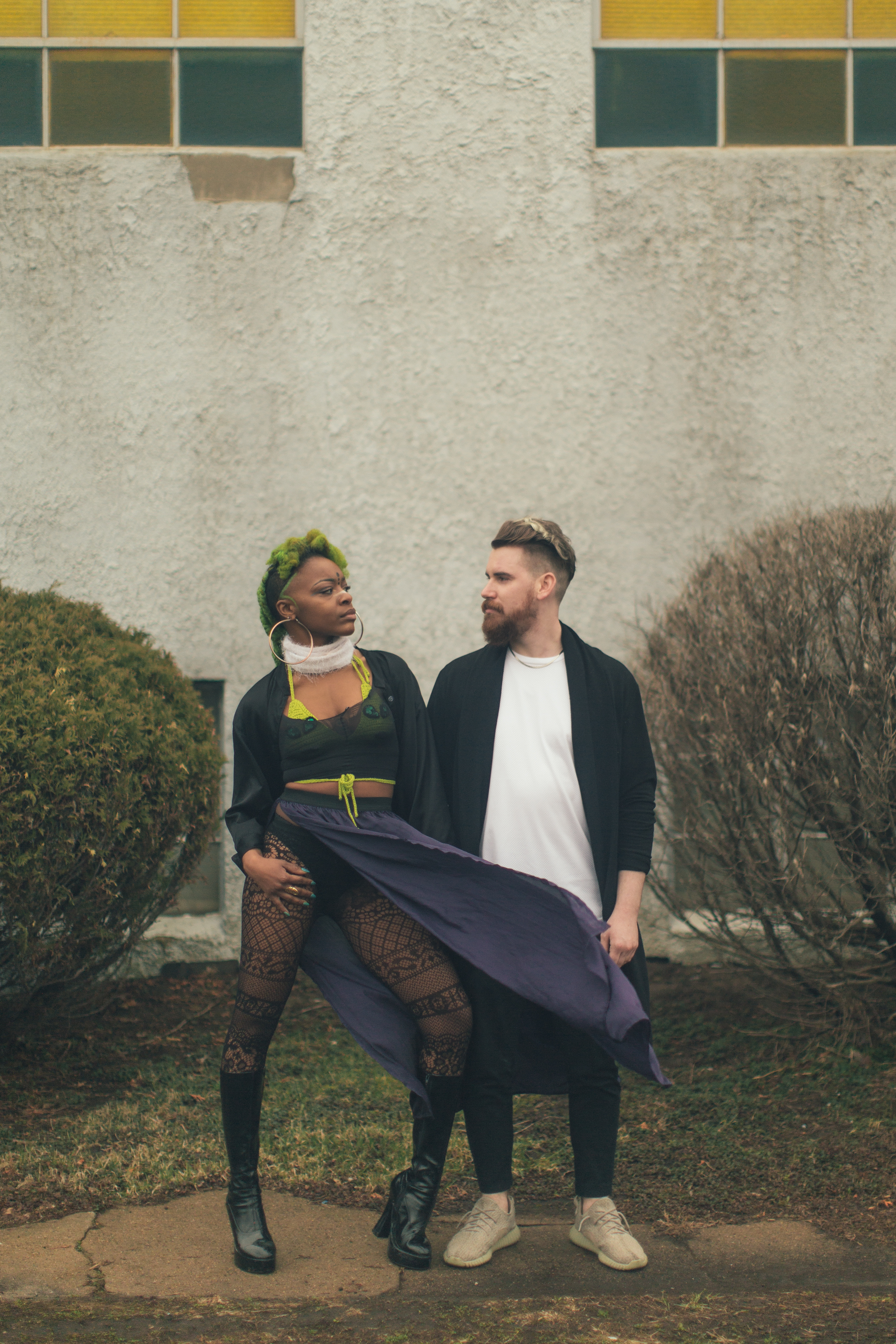 Backstage Ball: How did Ancient Posse get its start?

Steve Bergeron: Well we really try to steer clear of talking about how we met. That’s why there may or may not be various rumors floating around regarding how exactly we came to be paired up. Part of the reason we hold back on that info is some attempt to keep the mundane life details separate from the atmosphere we work so hard to create in our music. But mostly it’s that if you read enough about the artists you love, eventually you start to realize that pretty much every band’s origin story is total bland sauce.

Kamillah Camp-Bey: …Or BS. What we do say is at the beginning of our partnership, we definitely did not intend to be making music together. Didn’t think about that future. It’s just something that sprang up out of our struggles and our separate needs to create all the time. But I also remember that I wrote in my journal that I was going to make it a mission of mine to get this man (Steven) to share his music with people beyond his family and friends.

BB: What are each of your roles in the band?

SB: Probably most importantly, we both spend a lot of time together conceptualizing and visualizing what Ancient Posse is all about. If we’re being super broad, we’d say Kamillah oversees the melodies and the visual aspects of Ancient Posse, and I take care of production, but there’s so much crossover.

KCB: We were lit just talking about how at this point, it’s getting a little difficult to ascertain which brain a specific idea came from. Either because we’re constantly reworking things or because we’re on a mindmeld vibe. Scary, but good scary!

SB: We both sing, we both write songs, we both have production ideas and opinions on poster design and outfits and all kinds of stuff. The main difference is I have a lot more experience with Logic Pro and tickling ivories.

BB: What was the first song you wrote for Ancient Posse?

KCB: So technically, the first music we did together was a cover of Rihanna’s “Stay.” We made a whole video and everything.

SB: That was about three and a half years ago and that was the project where we came up with the Ancient Posse name. After that, we pretty quickly realized this was something we wanted to do all the time. So it’s not one hundred percent clear what the first AP song was, because there was a weird transition where some of my personal tracks I was writing were becoming mutants because we started working on them together in the middle. But “Windless” was definitely one of the first, and it’s one that’s made it all the way through years of self-doubt and reworks and producers and mixing and mastering to be heard by humans. 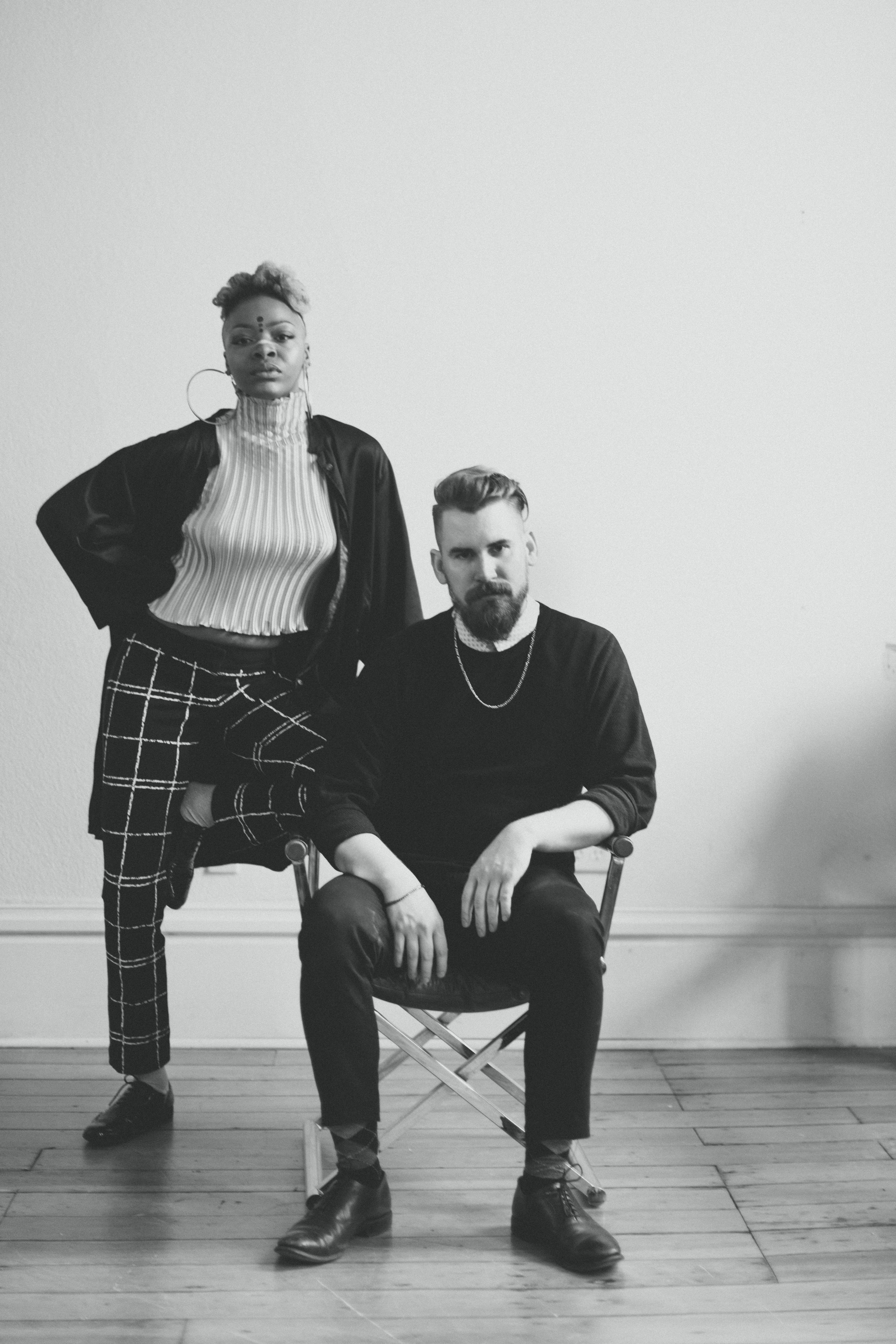 BB: Tell us a bit about your writing process.

KCB: We’re pretty happy that our writing process is still not a set-in-stone, routine thing. We are finding that certain things are happening more often and need to be embraced, but roles still switch pretty consistently song to song.

SB: Like, Kamillah is getting more confident in her skills as a melodist, so it’s becoming more frequent for her to give me a melody and specific mood and production parameters for me to put chords and beats underneath. But then there’s all the other ways these things come together. Sometimes I will have a specific tone or chord progression that will spark a song idea in Kamillah, or I’ll just write a whole song on the computer by myself. I know it’s a little tricky to talk about songs that nobody’s heard actual recorded versions of, but there’s a song we’ve played live a lot called “Ruins” that we basically wrote in chunks over months of rehearsing it live. Or a song called “Goldenrod” that used to be called something else before we played it at our first show at the Mews in 2016 and realized it needed to be pretty much completely rewritten if we ever wanted to play it live again.

KCB: Anyway, usually after the original spark of inspiration is a whole — potentially emotional — tug of war between which elements are necessary or central to the song, the mood, the band. It can be hard to shove your most personal creations into the super honest light of your musical partner, and some musical arguments have gone on for days or weeks before reaching a conclusion. That might sound more exhausting than it is. Or it may just be exhausting. We’re pretty good at compartmentalizing.

BB: You’re both very talented musicians. How did you get your starts?

SB: I studied violin from 4 years old. So there’s a lot of classical training from that, but it’s a super difficult instrument if you don’t practice every day and I feel way more at ease on the piano or keyboard. It’s much more comforting for me. Growing up, the piano is what I played to relieve any stress I had and plenty of that stress came from violin lessons! At about 16, I got a Mac Mini and starting writing music on Logic. I wrote electronic music for probably seven or eight years without really showing anybody but family or close friends. I lived in North Carolina for about four years and when I came back to Iowa in 2010, through a kind of roundabout way, I started writing and recording with Parlours and not too long after with Canby.

KCB: I did a lot of musical theater in high school. I wrote a lot of songs around the same time, but never really thought of them as being anything more than little escapes or really personal forms of self-expression. But looking back, I think I was molding a talent that I wasn’t quite aware of or at least embracing yet.

BB: What’s been the biggest moment in your career so far?

SB: [Last year’s] 80/35 was such a cool opportunity and we were so stoked to be picked.

Secure your spot for the February 23 event here and in the meantime, check out the music video for Windless!