Logan Christian sits comfortably wherever you place him. We’re fine in any room as he tours me around Midday, his abode; half living quarters/half recording workshop. Four years ago, he purchased it, both as a house to use as a studio, and as a studio where he could lay his head.

“It was just a dream I had before I ever really got into studio work,” says Christian, “I was probably 17 or 18. I thought I’d really like to buy this duplex, or get a building where there’s apartments up above and a studio down below.”

Raised in Mason City, Christian originally started playing guitar but soon realized his calling was not creating sound, but capturing and manipulating it: “After playing guitar for seven years,” he says, “I knew I wasn’t a really great guitar player, and I knew I was probably going to be better at engineering, so I went down that path.” That path includes producing work for an ever-growing swath of Iowa musicians including current work with Hanwell, Dustin Smith and Gabe Cordova as well as the aforementioned Parlours.

You may recognize Logan if you have ever played a show at the Vaudeville Mews at any point during the past decade. He was employed there as a sound man. Since last fall, however, he left the place where he went from starting as a volunteer to running sound for some of the biggest indie shows to come through Des Moines.

But that doesn’t mean he’s left the life behind the sound board. On the contrary. “I go out with the Envy Corps [and run sound for their live shows] 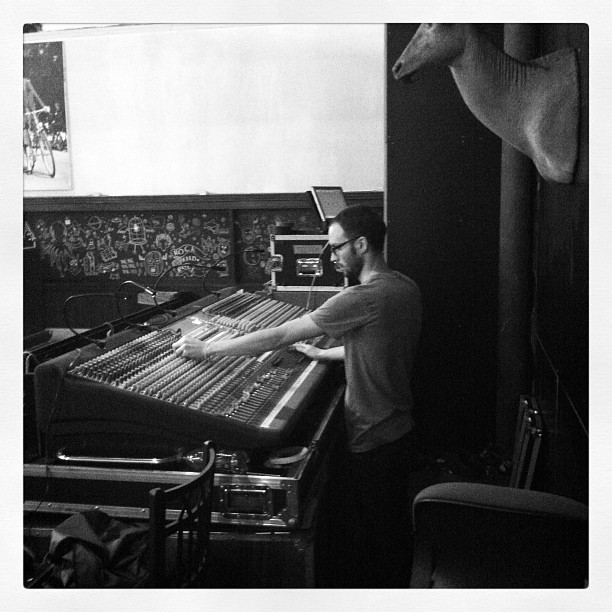 locally and on the road.” He’s also started running live sound for some of the Civic Center Temple Theatre’s productions, which affords him an extension of his home studio in which to also capture music. “They’ve got a grand piano there,” he says with a smile.

The dilemma of the producer’s ear is that, even when listening to something that he hasn’t worked on, “I definitely listen to the production first,” says Christian. “I have to get through that first to really start breaking down the music and deciding if I like it beyond that.” Maybe dilemma is not the right word, but just something that goes along with how he has conditioned his brain to interpret sound waves of any type. And that ear is the basis for Logan Christian’s work at Midday and abroad. “Each gig seems to have its new challenges.”

We’re listening to another unfinished Palrours song. Logan pulls back all the tracks to reveal the background harmony vocals. They’re High Violet-esque; haunting and synth-like. He further peels back the layers to reveal the true captured voices sans manipulation. You can see it in his face that this enhancement, coating the music with unseen nuance, is what drives him as a producer. “Stuff that’s texture, that doesn’t get noticed at first,” he says, “The small details. I love that. I guess I just don’t care to play lead guitar.”