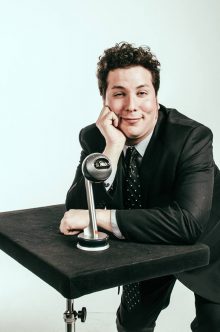 Pants OFF! Podcast producer and host, Brian Campos, will honor us with his participation as emcee at this year’s Backstage Ball awards ceremony! Brian has been involved in the music scene as a performer, music fan, and volunteer for over a decade. As a lifelong Des Moines resident, his observations and connections made over the years were the catalyst for the creation of Pants OFF! Podcast. The self produced audio podcast is currently in its fourth year and nearing a milestone, 100 episodes. The program features long form interviews with local, regional, and national artists sharing their stories of both success and struggle.

Congratulations and thank you to Brian Campos, this year’s Backstage Ball emcee. Join us on February 24 at Streetcar 209 to celebrate Brian and other individuals making noise in and about Des Moines’ music scene.  – RSVP for Backstage Ball 2017.