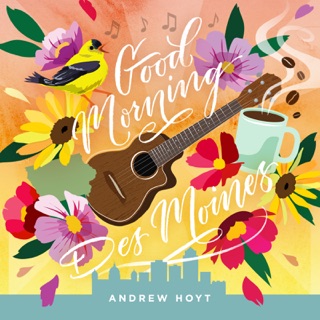 What a guy! Local musician, Andrew Hoyt, recently released his new song, “Good Morning Des Moines,” on January 31st. The singer/songwriter reached out to the DMMC and had the very thoughtful suggestion of donating the proceeds of the song to the DMMC Music Education programs, such as our after-school programs and music summer camps! Andrew says that he really wanted to write a song that spoke from his heart and has hopes the song reaches others the same way it reached him. Follow this link to donate via Facebook and Andrew will send the song your way!

Here is our quick Q & A with Andrew Hoyt:

Tell us a little about the song, “Good Morning Des Moines.”
•I really wanted to write a song about Des Moines. Des Moines needs a theme song and I hope this is something we can all relate to here in the heart of Iowa.

Where was the song recorded?
• Golden Bear Studio. Bryan Vanderpool of The Well Pennies is so talented in every aspect (instruments, mixing, production). I’m so glad that I recorded this in Des Moines because it just seemed right.

How long have you been playing music?
• 6 years. My first show was at Stevie C’s in Grimes (my hometown). I was 19 at the time and I just turned 25 in December.

What’s next for your musical career?
• I have so much music yet to release! We just recorded a cover album at Golden Bear Studio and I’m about to put out an EP from Winter Park, Colorado at Eagle Wind Sound Studio. I’ve been songwriting with musicians I’ve met from various songwriting conventions over the last year for TV/film music placement.

Where can people listen to your music and where can they download the new single?
• My music is on virtually every streaming/downloading platform, including Spotify, Apple Music and Amazon Music.

Why made you want to donate the proceeds from the song to the DMMC?
• I thought it would be really cool to donate proceeds to a Des Moines organization. After all, it’s a song about Des Moines! DMMC was the perfect choice and I’m so glad that this song is benefiting young musicians.

What do you enjoy about Des Moines and The Des Moines music scene?
• Des Moines and central Iowa musicians rock. Literally. Such a great group of people that I am proud to know (and some I will get to know better!). Josh Sinclair, Lily Detaeye, Bruce Day, Dustin Smith (The Maytags), The Host Country, Brazilian 2Wins, The Well Pennies, Royce Johns, The Sheet, Abbie & the Sawyers, Ryne Doughty, Chad Elliott, The Fuss, LAV.ISH, Andy Fleming… I know there are many more and some I missed!

Thanks again, Andrew, for your very generous and thoughtful donation. It’s through donations of many that we are able to provide more musical opportunities for our youth in Des Moines! Visit this link to donate straight to Andrews fundraiser, or learn how you can become a DMMC Member, get DMMC event perks, and help build Des Moines into a stronger music city!