Ames has a long history of good bands, and I’ve been in and out of bands in different capacities since the early 90’s. During that time, though, the

bands didn’t really integrate with each other that much. Gigs seemed difficult to get, and it was competitive, and bands weren’t as willing to support each other. And there wasn’t always much of an audience for them to play for.

A lot of that changed by the turn of the millennium, although I honestly have no idea why. The best example of this that came about, though, was the creation of the Bi-Fi Records collective, a group of like-minded people modeled loosely after the Elephant 6 group out of Athens, Georgia. They are probably best known for the genesis of The Poison Control Center, but they also helped other bands make records, and generally just created a friendlier, more supportive creative environment, until people moved away and life events happened, and people kind of went their separate ways. 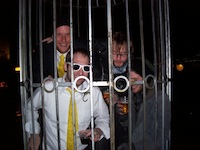 Later, around 2007, my friend Jordan moved back to Iowa, we began making music again, and we had heard about the open mic on Sunday nights at a club in Ames, the Boheme Bistro. We didn’t have a full set of music, so it seemed like a good way to get our “sea legs” in front of an audience. It was fun, everyone was nice, and all the music was great. Encouraged, we began to do this regularly, until, all of a sudden, the Boheme decided to close. Right when it was feeling like something really cool was going on, it was going to end.

One night Jordan told me that one of the Boheme musicians and supporters, Nate Logsdon, wanted us to come over to his place to talk about music. We went, and Nate told us he didn’t want the Boheme scene to end, and that he had an office in Campustown in Ames, where a newsletter was published called the Ames Progressive, and that he thought we could maybe move the open mic there. He also had some ambitious ideas about reaching out to even more people and creating a music scene, and seeing what happened.

We were happy to be included, and very quickly the Ames Progressive open mics caught on, and expanded. After the first night of music, it was so

well attended they rented the larger office next door to accommodate all the people.

From here, things kind of snowballed – what started out as an open mic became a venue for shows, and when a new band or musician would perform, everyone there supported them, and then they would begin supporting the other musicians. The Ames Progressive changed its name to The Space for Ames, and also featured art, poetry, yoga, films, or whatever event anyone really wanted to try out there. Friendships developed, and enthusiasm began to grow, show by show, as time went on, culminating in things like last summer’s Maximum Ames Festival, or The Space’s 4th Anniversary party, which featured 50 bands in 15 hours.

I think the key to what’s been going on in Ames is that there is a spirit of “let’s do this together.” I also think that this isn’t just an Ames thing – it’s 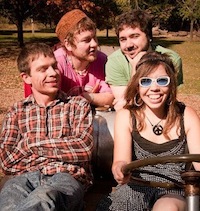 an Iowa thing. I see more Des Moines bands playing in Ames, and vice versa. I see a strong connection with the Fairfield scene, and Iowa City. Bands are connecting with each other, putting shows together in each others’ cities, and having a ball doing so. There’s a spirit of openness, people reaching out to each other and being receptive when they are reached out to.

Something that has turned around in the meantime (again, in my opinion) is that people are actually going to these shows – there used to be a lot of empty clubs you’d play to, and it felt awkward by the end, both for the performer and the club owner. But nowadays there’s an audience for culture in Iowa, willing to check out something they’ve never heard or seen before, and it’s really that component that makes a music scene – if there’s no one to play to, it really doesn’t matter how good your band is. In a lot of ways, the people who go see local music are more important than the bands themselves, because they give bands a reason to exist.

Iowa music has a lot of great things going on right now. And it’s an inclusive environment. If you like the looks or sounds of things going on, and want to be involved, I’d encourage you to do so. If you’re a musician, put a band together, and put on shows. There are a lot of great venues around that are eager to hear the next thing. If you’re already in a band, go check out some other bands, and when you hear something you like, introduce yourself to them, and see if you can do a show together sometime, either in your city or theirs.

If you’re not a musician, go to a show with a line-up featuring all bands you’ve never heard before. It may not end up being your cup of tea, but you may also discover your New Favorite Band, and the best part about that experience is that they may just live in your town, and you can then see them all the time. If you’re feeling inspired by local music in general, you can also do things like volunteer for the DMMC – you could go see shows and write about them for the website, or help out manning a booth, or help set up things like Gross Domestic Product or the 80/35 Festival.

Bryon Dudley is a member of Strong Like Bear, Liana, Stratum, and Rockets of Desire. He runs The Spacement recording studio and sits on the board of the Ames Progressive, a non-profit organization dedicated to providing independent media for Ames and supporting the local creative community. He’s lived in Ames most of his life.