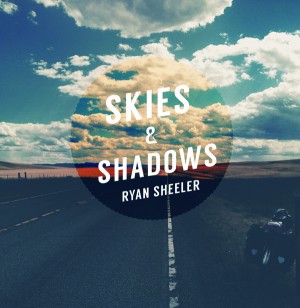 This review was written by volunteer contributor Jeff Stagg. Want to write for this website? Contact Us!

Central Iowa’s Ryan Sheeler’s latest offering, “Skies & Shadows”, has nine heartfelt songs by the singer/songwriter.  All but two of the songs were written solely by the artist.  Mr. Sheeler lists as one of his influences, Steven Curtis Chapman, but I also hear a lot of Dan Fogelberg in his music.  I could picture Fogelberg’s “Leader of the Band” fitting right in with Sheeler’s album.

The album begins with the rockin’ title song which includes some nice guitar work.  And just when you think it may be a “downer” song with the lyrics:

Of disappointments, ups and downs”

Sheeler lifts you up with the last line:

This seems to set the tone for the album.  There are stories of sadness on the album but, at the same time, there is a message of hope that runs throughout.

The musicianship is very good but the real strong point is the lyrics on the album. From the tough tale of death and despair in the “Late Spring Rains (Alachua County News)” to the honoring of the veterans in the song “Fields and Footsteps”, the lyrics stand strong.

I particularly liked “Class Reunion (November ’91)” as anyone who has ever attended a class reunion could relate to the song’s story.  On “Moon Over Texas”, Sheeler shows off his musical talent playing guitars and piano on the tune including a very nice guitar solo on the track.

Ryan Sheeler’s “Skies & Shadows” displays a talented singer/songwriter who writes and performs music that is both inspirational and thought-provoking.