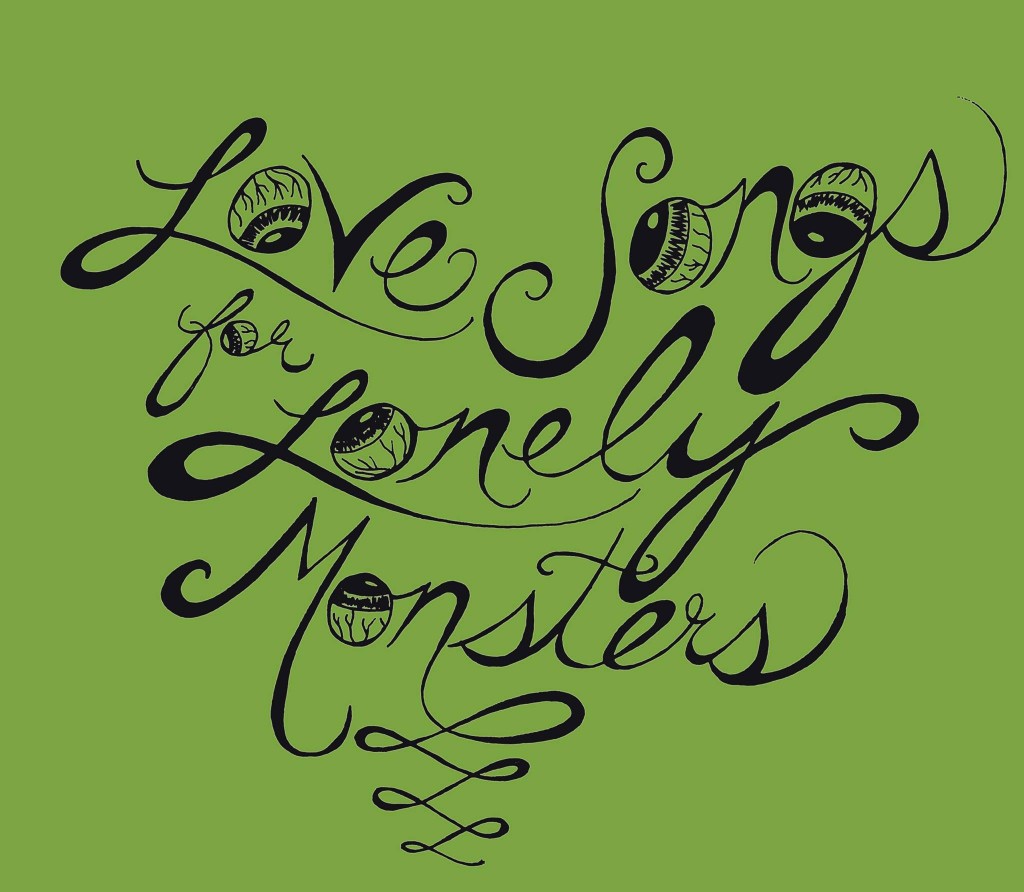 Listen while you read:

If you had told me a year ago that I would be surprised by Love Songs For Lonely Monsters’ eagerly-anticipated debut album, I would have heeded that news with skepticism. That sounds like disappointment, but it’s quite the opposite. I’ve probably seen Love Songs two dozen or more times in the last three years, and they quickly gained status as one of my favorite hometown bands. And likewise, I got to know their songs quite well. So when glancing down the track listing of their self-titled debut, much to my surprise, I only recognized a third of the songs. I’d thought, “Surely Inherent Trait will have made the cut. And the one about the nobility of lightning bugs? Heck yeah, I love that stuff.” And indeed, there are a few fan favorites, Ganglion Sister and Bedlam chief among them. But there is a great deal of range on display here, far beyond the barely-tamed noisier aspects of their live sets.

An early standout track is the deceptively clever “Phone Calls from Beyond the Grave.” After a syrupy wash of a synthesizer, the band launches into an incredibly catchy song that subverts the slightly goofy attitude the title would lead you to believe. Musically, it’s a mid-tempo slow burn that nicely highlights frontwoman Amy Badger’s vocals. There are some great lines in there, too. “Phantasmagoric – not a word that’s commonly used,” she sings (sad but true, that), “But my receiver’s dripping wet with ectoplasmic goo.” That line reads like a clunker, but she pulls it off in such a way that would make Roky Erikson proud. It’s a lament to impossible love (I think), with a soaring vocal melody in the closing minute that is surpassingly triumphant, regardless of the despair the lyrics relate.

The band hits full stride with “Automatic Repulsion,” the record’s penultimate track. Nick Parks and Kevin Neal’s buzzsaw guitars build upon one another like a brick outhouse — they’re at right angles with one another throughout the album’s nine tracks, but never more so than here. The jagged back and forth, paired with Chris Lachky’s rollicking bass lines pay reverent homage to Gang of Four, while Badger channels equal parts Karen O and Debbie Harry.

Closing the album is “Love Songs For Lonely Monsters: The Movie,” wherein the band stands shoulder to shoulder with the likes of “Wu Tang Clan Ain’t Nothing’ Ta F*ck With” and “Fetal Pig vs. Mecha-Godzilla” as Bands With A Theme Song. And indeed, the track serves as a treatise for the album’s recurring theme: hardly a campy, B-horror send-up, it’s a sincere lament that states, quite rightly, that the least among us rarely if ever feel like they belong, not because they do not deserve it, but because the rest of us simply can’t allow them to. A spare guitar and vocals duo, Badger’s vocals are well on display again here. It’s striking in its stark simplicity like nothing else on the record.

If I had to lodge but a single complaint, it’s that the production value pays few compliments to Brian Gellerman’s drums. He’s a steady-handed stickman, make no mistake; you can set your watch to him any day of the week, and he never overplays. Again, I’m not trying to damn with faint praise there. Any drummer will tell you that it’s the easiest thing in the world to overplay. But playing what is right, well, that is a beast much harder to harness. And he’s spot on throughout, serving each song the deft restraint they need. But I could have used a bit more punch from his bass drum, and more snap from his snare.

Now that that particular nit has been duly picked, the record sounds great over all. Parks’s elaborate compositions are dirty and full of noise, gliding over the a rhythm section that gives no quarter, and far from falling victim to a club’s sketchy PA, the vocals have never been clearer. This album demands repeated spins, and given how damn good all of these songs are, that is hardly a chore.