Home » News » Album Review: “I Wrote It All Down” – Jordan Mayland & The Thermal Detonators 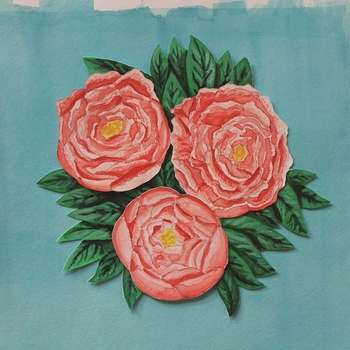 This review was written by volunteer contributor Christopher Ford. Want to write for this website? Contact us!

Listen while you read:

My favorite musical artists are typically individuals over bands. An individual comes to art with a vision and can execute it clearly without interference of priorities from others. This is why most bands do better with a producer that sees the big picture. When you let the band make the call on whether a take is the take or whether the drums are right or not or the guitar effect twangy or the bass bombastic enough, you run into trouble. It’s like trying to get a group of friends to decide which photo of them they like the most – each will choose the one in which they look the best.

So here you have Jordan Mayland, an individual artist. You also have “The Thermal Detonators” (your esteemed reviewer is biased in this review, by the way, due to his adoration of Boushh), the name of the band here. The truth is that the band is real musicians on stage, but in the studio, it’s almost exclusively Mayland calling the shots, playing all of the instruments, with some critical studio wizardry from engineer and I’m guessing accidental producer Phil Young. I’m not sure exactly of Mayland’s own engineering capability or producing prowess, and though his Renaissance Man nature and pawn shop employment history would indicate he likely could do this entirely on his own, I predict that a record made without Mr. Young at hand would be notably different, and likely, not as good as what we’ve got with I Wrote It All Down (some clever production decisions and maybe a little bit of arrangement tightening came from him, I’m guessing).

The real issue of interest to me is not whether or not this record sounds good, or if the songs are good, or if the musicianship is good. This is Jordan Mayland, people. If you know anything about Iowa music history, you already know that the answer to all of the above is yes. You already know the record is going to be well-made. The question I hope to answer is one you maybe hadn’t thought to ask: Does Jordan Mayland believe his own words when he sings them?

The trouble that I expect someone like Jordan may run into when he gets to creating these days is this: He knows he is good. People tell him all of the time. I’m not saying he is proud in any way; on the contrary, I’d say he is quite gracious with compliments, ready to hand them to others, and always humble. However, he still knows that he knows what he is doing. But this conflicts with the fact that he isn’t selling thousands of records. This is not a new predicament in the world of music. We all can think of artists we discovered and loved and thought how is this person not like super famous? There isn’t really any specific answer, but it’s a question that Jordan may be subconsciously pondering as he sits down at his piano.

I may be wrong about this; perhaps Jordan doesn’t give two clicks of a metronome whether or not anyone hears his music, but I’m gonna go ahead and guess if you spend years crafting a record this good, and take the time to make some pretty cool artwork (don’t buy this online people, get to your local record store and demand they stock it or better yet go to a show, where Jordan will sell this album to you at a criminally low price…do  your calorie intake a favor and drink one less brew at the show and pay Jordan twice what he asks, you can insist it’s a tip), and make a cool music video in which you crawl around on the ground in a graveyard, and you work to get people to see the video, and then on top of all that, organize a group of musicians to translate these songs to the stage, rehearsing regularly, scheduling shows, spending hours to set up, perform, tear down, etc., all to help promote the record – you wouldn’t mind actually having a few people listen to the damn thing.

So let’s assume that Jordan has gone into this project knowing that he knows how to write good songs and make good records, but contemplating how he can make a record that more people will listen to. If this is going on, how does he maintain sincerity? Does the project become more about himself than the songs? Jordan will die sometime this century (sadly, unless remarkable technologies offer to extend our lives), but these songs will live on. Others will listen after Jordan is gone, some may re-interpret with their own performances, and who knows after that. These recordings may be listened to by future space travelers 10,000 years from now. The song is everything. The singer will change, the tune remains the same. Can Jordan separate his own interests enough from the creation of these recordings to serve the full potential of the songs?

Well, yes. I’m probably not qualified to make this assertion, but I’m writing this review so write your own if you’ve got something to say. The deal here is that Jordan couldn’t not make this record. He loves music too much. He wants people to hear his music because he wants to make more. If a song plays in the forest and no one is there to hear it, does it make a sound? The process of creation is cyclical and ever-evolving – a loop is completed when the audience’s reaction feeds back into the artist’s questioning and hopeful heart, allowing him to respond with something new. Jordan is done for when that tree falls alone.

The reason I think Jordan believes his own words is because for a good portion of “I Wrote It All Down”, he chooses to not use any. A few fantastic instrumental tracks are what make this album great – they provide emotional context and I’d say convey more about who Jordan Mayland is as an artist and hell, as a person, than the songs with lyrics. Sound does not convey meaning well, but it does convey emotion and feeling wonderfully in the hands of a talent like Mayland, especially when orchestrated with such precision and generous focus as on this set (Jordan, if you’re reading this…you could’ve expanded on your instrumental pieces in many ways and I’m sure it would’ve been satisfying for you to create, but the concise nature of the arrangements here is brilliant and provides a beautifully clear listening experience for those of us on the other side of the circle).

These instrumental pieces form an emotional foundation that bring Jordan’s personality table nearer to the surface when we listen to his lyrics. In the self-proclaimed single “Lie Detector”, Mayland opens with “If I don’t want to I don’t have to throw it all away, I don’t want to throw it all away. Find someone to tell your story, I could use a break. Everybody wants to fornicate.” Mayland’s delivery here shrouds the meaning; I mean, it doesn’t give much away. So you take it in stride. But thinking back on the lyric as you linger in the closing track “Stop” (a song that sounds like maybe it had lyrics at some point but Mayland self-edited in service to the feeling of the song and the set as a whole – just a guess), the tension created by piano and electric guitars tells you everything you need to know about Mayland and why those words are there in the opening of “Lie Detector”.

Possibly the best lyric-laden track on the album, “You Used to Call On Me”, is made so much sweeter when you try to make the 56 seconds of light in “Call On Me (Reprise)” shine a bit longer. The inclusion of this reprise is truly a brilliant choice. “You Used to Call On Me” proper is probably the best because of it’s support from the reprise, but also because the musical arrangement (chord selection, changes, transitions, instrumentation, melody, etc.) holds up Mayland’s words so well. The building tension behind Mayland’s repeated “Don’t think about it” are what tell me he feels it. He believes it. He’s pleading. His vocal delivery steps up to the plate with a steady swing here – he’s at his best in this tune – sure of his words and why he put them on paper and why he is singing them in this very moment.

I don’t know if Mayland will sell thousands of copies of this record, but I will predict that one day, long after we’re all gone, someone is going to love these songs very much.